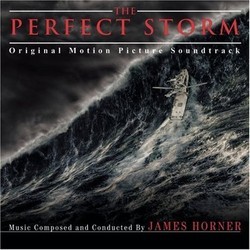 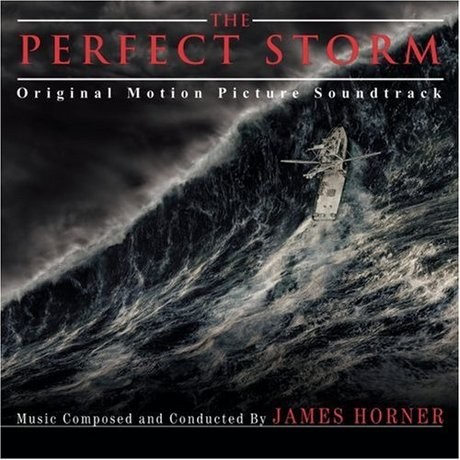 The Perfect Storm - 04/10 - Review of Tom Daish, submitted at 2010-09-26 19:52:34
James Horner's score releases of late have been pretty long, but I think this is just about the longest single CD ever. It seems a shame that he didn't win an Oscar and contract with Sony Classical in his early days, just think how nice such lavishly long albums of Star Trek II: The Wrath of Kahn, Krull or Brainstorm would have been. Of course, Krull has now been re-released fully expanded, but if The Perfect Storm album was only half an hour long, I find it unlikely that anyone would bother to fluff it up to almost 80 minutes in twenty years time. The film is based on a real life hugely freaky storm where three different storms collided and by the looks of the liner images, stars George Clooney and Mark Wahlberg (presumably chosen because they would look plausibly rugged) the film makes great pains to recreate the intensity of the occasion. It has been commented that James Horner's music appeared over every minute of even the loudest and most incessent of the wave and rain lashed action sequences, but I'm not terribly surprised - the opportunity to pour music over films like glue is one that directors find hard to resist.

The greatest feeling I get from listening to The Perfect Storm is that James Horner wasn't terribly inspired with the film. In theory it should have been a fairly decent source of heart tugging emotion, but even these sections don't seem terribly sincere. Coming Home from the Sea introduces the main theme which is bearly memorable, but crops up enough times that by the end you might remember some of it. One addition to the orchestra that works reasonably well is an eletric guitar which gives it a somewhat Michael Kamen feeling, although there would be no mistaking the two (apart from a few seconds of Small Victories which sounds like it's escaped from the finale to the American Symphony from Mr Holland's Opus). The action music is variable; mainly sticking to the vioins carrying it along and then dotting horn chords over the top. Several sections of Small Victories and Coast Guard Rescue are fairly effective, but are still surrounded by pretty unexciting stuff. If you're going to score action sequences within a storm, one might expect something a little more abrasive and well, tempestuous.

'There's no goodbye...only love' might have a pretentious title, but is a reasonably attractive cue which makes best use of the main theme and some rather lovel acoustic guitar riffs. The album is rounded out by John Mellencamp crooning Yours Forever in a sub Michael Kamen style ballad. It's actually not a bad song, the arrangement is good (particularly the folksy acoustic guitar opening and closing), but Mr Mellencamp isn't exactly a wonderful singer - kind of Bryan Adams but with even less quality of tone - which rather negates any good points. Basically we have another very overlong James Horner score album that might have had repeated listening value had it been half the length, but as it stands, is fairly repetitive on its own and there aren't really any great highlights, just odd flashes that are more interesting than the rest. Horner fans may like it, but otherwise something of a dud.
The Perfect Storm - 08/10 - Review of Andreas Lindahl, submitted at 2008-01-20 21:25:40
It's not strange or particularly surprising that Sony Classical makes a big deal about The Perfect Storm being James Horner's return to the sea. After all the soundtrack for Titanic has sold more than 28 million copies worldwide. Of course, the soundtrack release of The Perfect Storm won't even come close to those figures, but it's a good score, neverthless.

Two of the genres in which Horner excels as a composer are, in my opinion, drama and action. And with The Perfect Storm having plenty of both, the result is a score that works really well, with lots of music that will rock your house. Or your boat (OK, that was a lousy one...). When Horner unleashes the powerful sound of the symphony orchestra, with plenty of crescendos it isn't especially hard to imagine the sea with giant waves rising high above, swallowing everything that comes in their way. Tracks like "Coast Guard Rescue" and "Rogue Wave" offer some of the most exciting and best action music Horner has ever written, complete with the composers' clanging anvil, chrashing piano, strong brass and swelling strings. In short, everything a Horner fan could ask for, even if it sometimes gets a little too caothic for my taste. What the score lacks, though, is a good, strong theme. Not that the score is themeless - the scores' main themes crops up in virtually every track on the CD - it's just that they could be much better.

The Perfect Storm is a rather typical Horner score when it comes to sound and orchestrations - much of the action music could easily have been written for Titanic instead - and while it certainly isn't as unoriginal and derivative as Horner's score for Bicentennial Man one could point out several moments that sound familiar. But I won't. However, what we haven't heard in scores by Horner that much before, is the sound of the electric guitar. Although it was used very briefly in the scores for Courage Under Fire and Titanic, The Perfect Storm marks the first time Horner has used the instrument throughout an entire score. It has, however, been given a small role in the background, serving as a dramatic backdrop to the rest of the orchestra with its raw and wild sound. This technique works really well, and saves the action music from becoming too cheesy, which often is the case when composers use electric guitars too much.

On to Horner's recent found obsession with end credit songs. If these are written on the request of the director and producers, or if Horner himself is the one too blame is probably something we will never get to know. The song for The Perfect Storm, titled "Yours Forever", is performed by John Mellencamp and while it is an okay song, based on the scores' main theme, I really miss Horner's end credit cues, which is one of few occasions when the composers get the chance to really develop their themes.
This soundtrack trailer contains music of: