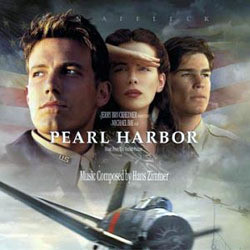 Show reviews in other languages
Pearl Harbor - 04/10 - Review of Tom Daish, submitted at 2010-09-07 22:38:53
There are pretty much two things you can expect from a Michael Bay film; lots of explosions and characters with the emotional resonance of a chair. I suppose the director of Armageddon and Bad Boys turning his attentions to an historical epic was always going to be met with some trepidation, but Pearl Harbour has turned into the film the critics love to hate. Cliché for sure, but true enough - even the adverts have turned to relying on members of the public cheerily saying the critics were wrong and everyone should see it anyway and of course they will. Hans Zimmer seems to remain at the very top of film music, for better or worse. While what he has spawned with his Media Ventures gang hasn't always been high art, the man himself is a considerably more adept craftsman than his protegé appear to be, something that is often forgotten. However, Pearl Harbour seems to have left Hans himself left with little to say.

The story goes that Zimmer spent vast quantities of time attempting to come up with a main theme. I can appreciate that it's not always easy coming up with a big melody for a film such as this, some of the most successful film composers have had melody after melody literally flooding out and onto the page. Admittedly, Zimmer's main theme is pretty good, although frankly it doesn't compare to any of the multiple themes he came up with for Gladiator. Yes, the films are completely different in tone, but it was the diversity and thematic richness that made his stab at a sword and sandals epic so popular. Outside the main theme, there is little of any great originality. The album opens with a descending figure that is straight out of The Thin Red Line (Journey to the Line to be exact) and the gentle strings and piano moments that litter the rest of the first few tracks don't have nearly the haunting sense of doomed romance that made Horner's Titanic (the film Pearl Harbour appears to be trying to emulate - love and loss in a dramatic historical setting). His music may be manipulative, but Horner is still one of the best composers when it comes to providing the correct tone for a film. Here, Zimmer seems stuck in dramatic fudge land, trying to sound intimate, but epic, romantic, but forlorn and simply coming across as a bit on the shallow side.

This is of course a film set amongst the bombing of Pearl Harbour and Attack at least takes us away from the drippy romance of the album's first half. The Horner favourite, Shakuhatchi makes a few appearances and the opening percussive figure sounds like an imitation of Horner's Braveheart battle cues. Of course, the Zimmer swooning bass writing soon make an appearance and then a melody which is strikingly similar in almost every respect to the Entry into Rome music from Gladiator. The descending motif from Thin Red Line makes another appearances alongside a heavenly choir. I must admit, that my emotional core was resonated just a little more; Zimmer can certainly build an impressive musical presence at moments. The remainder of the cue is less striking and often had me in mind of The Lion King. The choral work in December 7th is similarly quite touching, although it's one of those choral moments that makes me wonder if I'm being duped. Choirs always make even the least interesting music either more epic or poignant than they might be, but in this case it's definitely a genuine high spot of the score.

War adds some more action of a more typically Zimmer nature, although the emphasis is more on percussion and strings than banks of synth horns or other brass overwhelming everything. Heart of the Volunteer concludes things in modest fashion with a pseudo Lisa Gerrard style vocal and choir, although the performer this time puts to mind Morricone's style of soprano writing more than Gerrard. Pearl Harbour is one of those exceptionally frustrating to review albums simply because, despite dragging a little in the first half simply because it's so samey, is an enjoyable enough listen. It's fairly tuneful, has a passable mixture of gentle and more robust music. Several reviews comment that it sounds half finished and I'm inclined to agree, although if the main theme Zimmer came up with was the best he could manage after hours of toil and torment, I don't suppose any more time would have made a great deal of difference. After being genuinely epic in Gladiator and far more imaginative in Hannibal, Pearl Harbour seems like a step backward, although I can't help feeling that Bay and Bruckheimer didn't help much given the music for their past films. Oh yes, there's a Faith Hill song at the opening which is as forgettable as the score itself, although I rather like it. It is yet another 80's style power ballad, but a superior example, if that's possible and given a scorching performance by Hill.
Pearl Harbor - 06/10 - Review of Andreas Lindahl, submitted at 2008-01-20 21:25:40
Zimmer fans decided early that Pearl Harbor, without doubt, was going to be one of the composers' very finest scores, similar in style and mood to the wonderful The Thin Red Line. And based on the grand trailer, with its powerful use of "Journey to the Line" from the latter score, it really looked as if this could be the film of summer 2001. Now, with the film being a Michael Bay and Jerry Bruckheimer vehicle, that possibility was rather small in reality, but the score - surely Zimmer couldn't miss this opportunity? Well, of course he could. It comes as no surprise that Zimmer's latest effort can't live up to all the hype surrounding it. It's not a bad score. Not at all. It's actually quite good. But I had expected the score to be bigger and more emotional. And better.

There is really only one major theme in the score, and while it is an excellent piece - very lovely, bittersweet and romantic - it's perhaps used a little too much, showing up in nearly every track, basically sounding the same all the time. There's also a sad, quite depressing theme, heard mostly in "Attack" and "Heart of a Volunteer", as well as a descending motif like theme, performed mostly by low strings, used throughout the score, that is very reminiscent of the already mentioned "Journey to the Line" cue from The Thin Red Line. This motif opens the first score cue on the
CD, performed by strings and piano, before the main theme is introduced for the first time. It's all very emotional and lyrical, with the orchestrations focusing on strings and piano, as well as subtle harp, brass, woodwinds and a single wordless female voice. The music stays practically the same until track six, "Attack", which is one of the scores' darker and more depressing cues, opening with shakuhachi, backed up by the typical Zimmer percussion, soon replaced by slow strings and solo voice.

Track seven, "December 7th", is one of the scores' highlights. While the first half consists of strings that don't seem to go anywhere, the latter half is a wonderfully, solemn piece performed entirely by choir. Great stuff. "War" is the soundtracks' big action piece. From the brass to the staccato strings and the percussion, this is Hans Zimmer in a nutshell. We have heard it many times before, of course, but I just cannot deny that this is a rather good piece.

Many have willingly pointed out the similarities between Zimmer's score and the music of John Barry. And while I partially agree with this, Pearl Harbor more than anything makes me think of Ennio Morricone. Especially the female solo voice, which really is spot on. It seems quite obvious that the music of Morricone was one of the sources of inspiration for Zimmer, when composing this score.

I won't spend that much time writing about the song performed by Faith Hill, "There You'll Be". It's more than obvious that its purpose is to make money. It's a decent song, but nothing more. Rather cheesy, actually.
Golden Globes: Best Original Score (Nominee)