Fear Strikes Out / The Tin Star 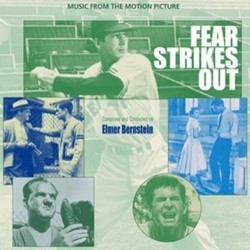 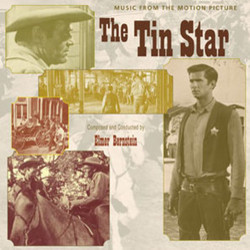 Fear Strikes Out (1957) was the true story of baseball’s Jim Piersall, who suffered from and overcame a complete nervous breakdown caused by the extreme and relentless pressure his never-satisfied father put on him to be the best of the best – from the time he was a young boy right up through his entering the major leagues. Beautifully directed by Robert Mulligan (his first film), with brilliant performances by Anthony Perkins as Piersall and Karl Malden as his father, the film is devastating, powerfully emotional, compassionate, and very moving.

The choice of Elmer Bernstein to score the film was serendipitous – Bernstein’s and Mulligan’s artistic temperaments were perfectly in synch and Bernstein would go on to score many films for him, including The Rat Race, To Kill A Mockingbird, Love With The Proper Stranger, and Bloodbrothers. Bernstein’s score for Fear Strikes Out really captures the film’s myriad moods – from the elation of Piersall’s baseball triumphs, to the dark road leading to his mental breakdown on the baseball field (an incredible scene), to his rehabilitation, and, as always with Bernstein, he really understands how to make music coalesce with images and illuminate character and story – his music is timeless, perfect, and, all these decades later, still incredibly fresh.

The Tin Star (also 1957) was in a different world altogether – a western, also starring Anthony Perkins, this time alongside the great Henry Fonda. The director was Anthony Mann, who’d already made a string of classic westerns, including Winchester 73, The Naked Spur, Bend of the River, The Man From Laramie (all starring James Stewart), among others. The film is a character-driven drama about a former sheriff-now-bounty hunter named Morgan Hickman (Fonda) – when the sheriff of a town is killed, the green, inexperienced Perkins is appointed as a temporary replacement, a job he would like to make permanent. He asks Hickman to teach him the ropes. In so doing, Hickman is reminded why he once wore the tin star and in the process rediscovers the person he was.

Mann and Bernstein had worked together once before, on Mann’s war film, Men In War, for which Bernstein turned out a great score. Bernstein had done only one western prior to The Tin Star (Drango), but he would soon go on to become one of the most beloved composers of westerns in film history, with his classic scores for The Magnificent Seven, The Comancheros, The Hallelujah Trail, The Sons of Katie Elder, The Scalphunters, True Grit, Big Jake, The Shootist, and others. His “sound” is instantly recognizable, even in this early stage of his Western game. The score has all the things one has come to expect from a Bernstein western score – colorful Americana, great themes, all perfectly matched to the film. He was as good as it gets. The CD was mastered from the original tapes stored in the Paramount vaults. Over seventy-seven minutes of prime Golden Age Bernstein.

This release is limited to 1500 copies only.