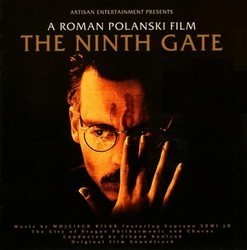 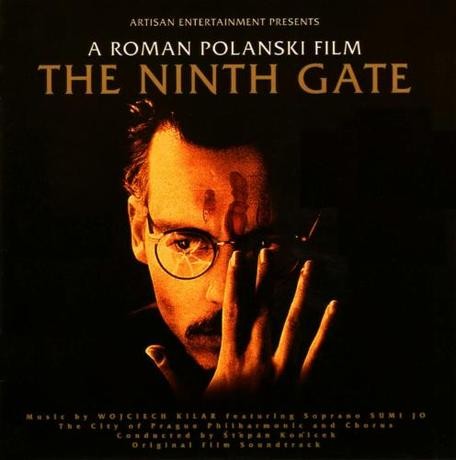 The Ninth Gate - 10/10 - Review of Tom Daish, submitted at 2010-09-28 22:18:26
Wojciech Kilar is perhaps most famously known for his scores to Jane Campion's The Portrait of a Lady and Francis Ford Coppola's overblown, but artistically inspiring Dracula. The Ninth Gate, from director Roman Polanski (he of Chinatown fame) is more of a psychological thriller and has inspired Kilar to write a hugely intense and penetrating score. As seems to be an increasingly common feature of soundtracks these days, The Ninth Gate is bookended by a concert arrangement of the main theme, which in this case is brought to life by soprano Sumi Jo. The overall result is reminiscent of Morricone doing his Edda dell'Orso bit, although Kilar's music is much more intense than Morricone's deployment, which is done for beauty more than anything else. There is no denying the beauty of Jo's voice, but the overall mood is much more sinister with repeating background motifs than the long string lines of Morricone.

The Opening Titles themselves are quite harsh listening and instantly draw the listener into Kilar's densely orchestrated and strongly dramatic music. Perhaps the most atypical cue of the album is the rhythmic Corso. This takes a somewhat Elmer Bernstein style rhythm and overlays it with a piercing trumpet solo. It soon becomes clear that Kilar's orchestrations favour deeper sonorities, as the low woodwind variation on the backing harmony for Corso immediately reiterates. His thematic approach is more akin to Bernard Herrmann; taking short phrases and ideas and playing with them as the drama sees fit. Cues such as Chateau Saint Martin use a descending motif that would not be out of place in one of Herrmann's many science fiction scores and is fact quite reminiscent of Herrmann's Twilight Zone music. There are other Herrmann-esque moments such as the motif in Liana's Death, which shares a similar four note pattern to the very ominous and famous motif from Herrmann's classic Cape Fear score.

Against the somewhat subdued, but always thematically interesting cues, there are a few more propulsive sections. Missing Book starts with a reprise of the material used in Corso, but the second half, Stalking Corso is a notably exciting action segment. This uses low end piano and percussion playing off each other, brief brass ideas and high end string and woodwind trills that serve to increase the tension. Both Sumi Jo and the choir are used sparingly. Jo is mainly used toward the end in counterpoint to the orchestra and in the case of Balkan's Death and Corso and the Girl, Jo is used as a counterpoint to the choir as well. The choral sections are perhaps the most exciting, especially since they are only introduced toward the end and so don't feel overused. The setting is very dark and sinister and would not have been out of place in The Omen although I wouldn't suggest that they are similar in either arrangement or thematic material, just the feeling of menace is strong in both compositions.

Kilar is not the most prolific of film composers, nor the most well known, but a modest output often means that when a foray into scoring is made, the effects are scintillating and hugely inspiring and this is most certainly the case here. While I would not deny that something such as Danny Elfman's Sleepy Hollow is similarly intense, Elfman goes for extreme overkill and throws everything into the mixture, whereas Kilar does it with Herrmann-esque economy. The repeating figures and cleverly deployed orchestrations effectively convey far more menace than choir and orchestra going for broke in every cue. The brief use of the choir in Balkan's Death and the finale, Corso and the Girl has much greater impact than had it been used in every cue. Sumi Jo is also used infrequently enough to prevent her contribution seemingly holding the score together (as Morricone is occasionally prone to do). Perhaps the only downside is the extreme intensity of the music, there are almost no lighter moments to lift the mood. The recording is also very sharp and upfront which means that the intensity is only heightened. However, anyone who is a fan of Bernard Herrmann and similarly stark compositions, will quite happily enjoy every minute of this superb score and such it comes highly recommended.
The Ninth Gate - 08/10 - Review of Andreas Lindahl, submitted at 2008-01-20 21:25:40
That the music of composer Wojciech Kilar seems to exist mostly in the periphery of most film music fans' spheres of interests is really a big shame. I'm afraid I have to admit that I at least used to be one of those film music loving people never really giving this Polish composer a fair chance. I know his score for Portrait of a Lady is supposed to be very beautiful and lush and his music for Dracula very effective and good, but The Ninth Gate is actually my first actual encounter with his music. What a pity. Not that our paths finally would meet, but that they for some reason did not meet sooner.

Because The Ninth Gate is one of the better dark, dramatic scores of 1999, with a lyrical, rather sad main theme, at its best when performed by soprano Sumi Jo, in the opening and closing cues, similiar to Ennio Morricone's way of using the beautiful sound of the wordless female voice. This theme is not used that much in the actual score, however (even if Jo's voice is used frequently). Instead, the most used theme is a piercing trumpet ditty. It's actual more of a motif, than a fullblown theme, and pieces of it show up in different parts of the score, in many different shapes, like in "Plane to Spain (Bolero)", which features the theme, or motif, played by slow strings and trumpet, supported by a subtle bolero rythm. Or as in "Corso", where the theme, performed by muted trumpet, is placed over a staccato rythm (by pizzicato strings and harpsichord) reminding me of the classic "Puttin' on the Ritz"... These parts of the score are all very minimalistic, simple and also rather quiet. Serving as a contrast is some more dramatic music, like the energetic "Boo!/The Chase", offering some great, exciting suspense music, with uneasy strings, brass chords and piano. Still, the ever present motif is there, almost all the time, either in full in the foreground or as just a shadow in the background.

Also "Balkan's Death" is full of suspense and drama, complete with dark choir. Very demonic, powerful and simply great, especially when combined with Sumi Jo's voice, low strings and percussion - one of the best cues on the soundtrack. The choir returns in "Corso and the Girl", offering some exceptional dark and dramatic music, while the last cue, one last time, gives us a stunning rendition of the main theme, with Jo's gorgeous voice in unison with the strings, closing the album as it opened.
This soundtrack trailer contains music of: