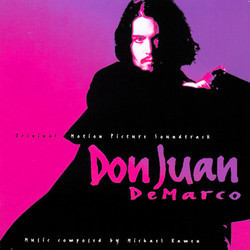 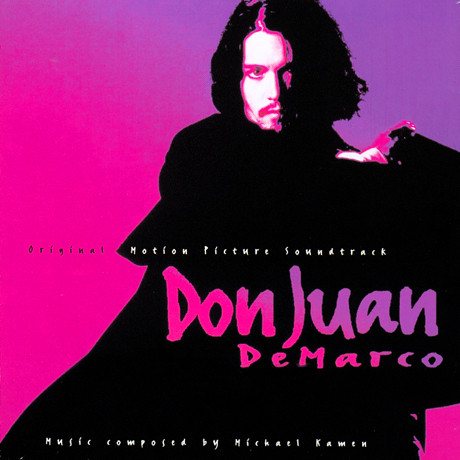 Show reviews in other languages
Don Juan DeMarco - 08/10 - Review of Tom Daish, submitted at 2010-09-28 21:45:26
The movie stars Johnny Depp as the eponymous lothario (more than 1000 times before the age of 21, not bad going) and Marlon Brando as a psychiatrist trying to figure out what makes him tick. As a result, much of the movie takes part in flashback as Don Juan's various encounters are described. Given the locations, primarily Mexico, but a mixture of other exotic locales, the score is brimming with habaneras and subdued flamenco suggesting romance, but also the throws of passion. Someone break out the cold showers.

The Bryan Adams/Michael Kamen collaboration seems to work pretty well, most famously on Everything I Do from Robin Hood: Prince of Thieves, but in many ways Have You Ever Really Loved a Woman? is an improvement, an enticing and lusty ballad, all acoustic guitars and gravelly singing. As with the earlier song, the instrumental arrangements that litter the underscore are even better and serves as the foundation around which the rest of the score is built. As a side note, a rather lovely Spanish language version appears in the film U-Turn, which also sports a fine score by Ennio Morricone.

Although the song melody provides the score's big theme, there are plenty of other ideas to go round; a habanera which appears, unsurprisingly in Habanera and towards the end of the album. It has a fairly obvious classical pedigree, but is amusing and most appealing. The first few tracks are a little incidental and it's not until the second half does it fully kick into gear. Doña Julia is a sublime and romantic cue featuring some gorgeous variations on the song melody for acoustic guitar with the orchestra picking up the melody from time to time. Don Alfonso is about the most frenetic cue of the score with some exciting guitar runs which burst in and out of the orchestral texture.

Doña Ana brings the more romantic material together for a sumptuous finale, the Hispanic tones appearing with more subtlety than previously. While the music has instant appeal and charm, it does take a little time to really come together, but taking that time is well worth it. As I have often said, Kamen is a composer who works his material in such a way that repeated listens almost always pay bigger dividends than immediate first time impact and this is no exception. A charming score that veers between delightfully comedic moments and fetching romance and thus highly recommended.
Golden Globes: Best Original Score (Nominee)