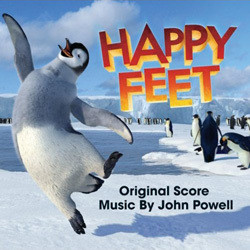 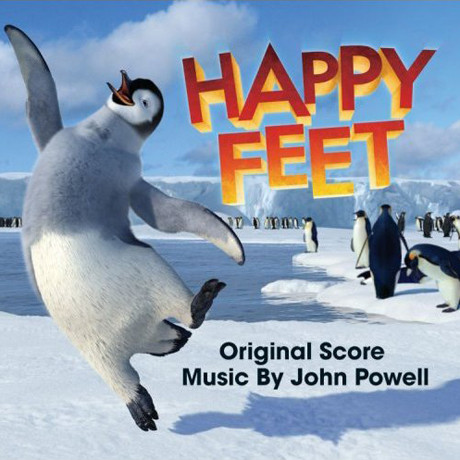 Happy Feet - 09/10 - Review of Tom Daish, submitted at 2010-10-08 23:15:00
Another week, another CGI movie about animals. Mind you, Happy Feet got good notices and certainly seems more inspired than the rather endless stream of mildly disappointing features that has crowded the market previous filled by 2D movies. Fortunately for us, John Powell gets to score a number of them and usually the better ones at that. Movies about penguins don't seem to be in short supply these days, but this takes the premise that penguins are born singers, but one, Mumble, is born as a dancer instead and hence is ostracized from the colony. The plot actually sounds a bit barmy (although it does feature tap dancing penguins, so I guess it's churlish to criticize), but features a slew of classic and not so classic songs, arranged by Powell for inclusion alongside his score. Possibly as a result, Powell's own music is rather disjointed in approach, but hardly disjointed in quality.

Never one to avoid making a feeble excuse, I'd like to take the opportunity to note that this is yet another Powell score that's a little hard to comment on in great detail. It has a lot of tracks, and almost as many styles within those tracks. The Huddle starts off in epic mood with the first instance of the huge chorus Powell seems to enjoy employing these days. However, that makes way for the effortless playfulness that Powell brings to such animated projects in Birth of Mumble. He takes the essence of Carl Stalling, tones it down a bit and makes it his own. The early tracks follow this lead, but there are plenty of variably outrageous interludes. The only moments that occasionally let down Powell's animated scores are the action cues where his Media Ventures pedigree starts to push through (and not in a good way), although with this and X-Men 3, that's clearly becoming a thing of the past. Leopard Seal is surprisingly dark in its drama, although it does lighten somewhat for the final moments while Killer Whales is a little less manic, but no less adult in approach. As a striking example of the changes in pace, Adelieland and Bob's LED take mambo (or is it flamenco?! - it all gets too confusing) to the orchestral max and in the latter track, working it up to full blow action with manic tap dancing and zesty mariachi trumpet.

A couple of songs that didn't make the song album show up here, notably the most sickeningly sweet children's choir version of Brian Wilson's In My Room. It's so over the top in its sweetness that you just have to smile. If you don't, you're a miserable bugger. Conversely, Lovelace's Pile is a lusty, wordless female gospel chorus with Hammond organ which is about as sleazy as one could expect in a kid's film about penguins. The mellow, Hispanic version of Leader of the Pack is almost unrecognizable from the hammy, rocky original, but none the worse for that and a surprisingly effective follow on from Exile. What with those, apocalyptic choruses for the aliens, some exceptionally fine dramatic scoring in the latter stages, Happy Feet really is an exceptionally mixed bag, yet it all works surprisingly well. Even if you can't bring yourself to tolerate the striking changes in direction, each part is impressive unto itself. The Frasier Crane school of eclectic composing; if every part is finely enough crafted, you can put them all together and they work. Marvellous.