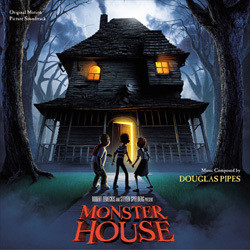 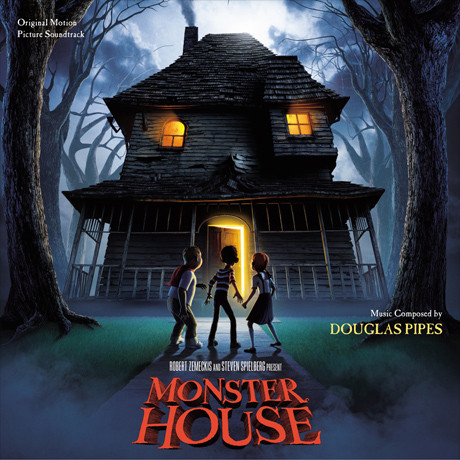 Show reviews in other languages
Monster House - 06/10 - Review of Tom Daish, submitted at 2010-10-08 22:09:13
In what many have deemed one of the worst years for CGI animated features, 2006 threw up only a couple of notable entries; Pixar's Cars was a shoe in, although after the more progressive realm of The Incredibles, seemed something of a step backwards. Even if it didn't do as well financially, Monster House 'from' Robert Zemeckis and Steven Spielberg attracted some good reviews. Also attracting praise was Douglas Pipes for the score, his first major assignment after a short list stretching back to 1989. Given Zemeckis' involvement, it's perhaps surprising that Alan Silvestri didn't get the gig, but Pipes has crafted an enjoyably old fashioned light horror score.

It seems that the way to score a kids horror film is not to evoke modern, 'adult' horror scores, but to lean on Hammer Horror and make things rather melodramatic. From the outset, this approach is most effective, notably the Opening - Titles, but the portentous House Comes Alive! which is capped by a strikingly Elliot Goldenthal style horn trill giving it a more contemporary twist. Unfortunately, as with many horror scores, the first half is rather low key and there are a number of quiet tracks that don't have an awful lot to say. Only when The Plan comes along and some of Pipes' engaging action music kicks in does it start to pick up momentum. Indeed, the action is where Pipes really shines and the Escape, House Chase and The Battle are rip roaring entertainment with flourishes of Goldsmith, Elfman and Goldenthal effortlessly fused.

As a horror score for kids, it bears some comparison to Julian Nott's wonderful Wallace and Gromit music, but whereas Nott had several memorable melodies, Pipes only contributes one and even that seems vaguely familiar. It doesn't help that the album is rather a victim of its own length and many of the sub one or two minute cues should have been omitted (although there is the occasional gem such as Cop Car Gets Eaten). However, there's enough good material to make it worthy of investigation, especially for those who are bored by current horror scoring trends and yearn for something a bit more old fashioned and musical. However, it does make one yearn for a release of Goldsmith's Gremlins, one of the best comedy horror scores ever written. My fingers are crossed.
Monster House - 06/10 - Review of Andreas Lindahl, submitted at 2008-01-20 21:25:40
Directed by Gil Kenan, and produced by Steven Spielberg and Robert Zemeckis, Monster House is a computer animated story about three kids and a scary house in their street. Relatively fresh film music composer Douglas Pipes, with just a couple of earlier film scores on his resume, landed the scoring gig and delivered some rather impressive and memorable music.

Performed by a large orchestra, the score is playful and bombastic, with an air of mystery and fairytale. Throughout the score, Pipes often jumps between suspense and action, with a healthy dose of playfulnes thrown in. A large part of the score is dominated by mysterious underscore, with plenty of tremolo strings and creaky woodwinds. When it comes to style, Pipes music can be described as something like a mix of Danny Elfman and James Newton Howard, but Monster House is far more than just a pastische on their music. Pipes seems to have a distinct style of his own, as well, and the result is a score that manages to sound fresh and familiar at the same time, if such a thing is possible.

Big action pieces like "House Chase" and "The Battle" adds some excitement to the mix, with staccato strings, horn shakes and impressive writing for brass and percussion in general. A theremin is used in some cues, which gives the music the expected mysterious sound, albeit with a playful, tongue in cheek, edge. All in all, Monster House is a good score, which unfortunately suffers from the "too many short cues"-syndrome. But Douglas Pipes without doubt is a promising new name on the film music scene, and seeing - or hearing - what this composer can bring to the world of film scores in the future will be very interesting.
World Soundtrack Awards: Discovery of the Year (Nominee)