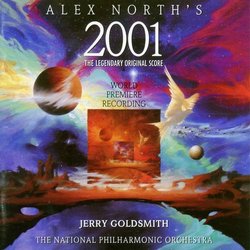 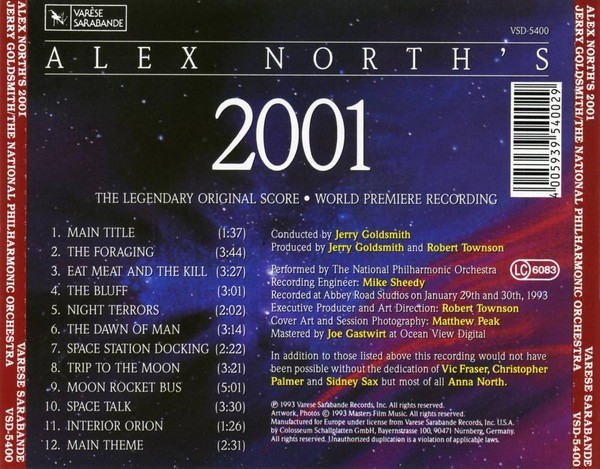 Alex North's 2001 - 10/10 - Review of Tom Daish, submitted at 2010-10-02 11:45:55
Stanley Kubrick was never really a director who liked to compromise and as such was meticulous in the creation of his films. Such as the case with 2001: A Space Odyessy which featured some (slow) ground breaking effects and is now equally famous for the collection of classical music it made famous. The most famous of these being Richard Strauss' Also Sprach Zarathustra and the other Strauss' Blue Danube. Had history been different, these pieces would almost certainly never have attained quite the same level of infamy and Alex North might perhaps have been a more famous composer. Reading North's impressively unbitter account of the story, it sounds as though Kubrick was essentially stringing both the studio and North along regarding music. The studio was very keen to feature an original score rather than the classical music. I actually find this quite surprising in some ways, but it is at least gratifying that the studio felt that North would be the best choice.

It would be wrong to claim that Kubrick chose the music badly, but I would dearly love to see the film with North's music in place. 2001 is not the easiest of North's scores to listen to, much of the earlier music is quite harsh and dissonent, although never becomes unlistenable. The Main Title is a fascinating paraphrase of Strauss' famous trumpet and orchestra curtain raiser and while the structure is similar, the writing is considerably more involved and features some more 20th Century harmonies. Perhaps it was the striking simplicity of Strauss' piece that Kubrick preferred, but musically North's is by far the more interesting. The next few cues are taken from the Dawn of Man section of the film which featured early man learning to make fire, discover giant dominoes and generally discovers the fundamental attributes that puts it above the other creatures. North uses yet more modern harmonies, grinding brass against high strings and a few fairly brutal outbursts. Eat Meat and the Kill as well as Night Terrors are both strikingly disturbing. Hints of the harmonies from the Main Title can be heard (which occasionally suggest Copland) which gives the music a little extra melodic grounding.

The Dawn of Man brings a modest sense of resolution to the opening and is followed by the balletic Space Station Docking, which would have replaced the Blue Danube. I would have been grateful for that; if I hear the Blue Danube one more time I think I might have to kill something. North uses lilting strings, woodwind and harps to give the piece a feather light elegance which perfectly captures the moment (quite how North saw fit to reuse it as the main theme for Dragonslayer I am uncertain). The rhythm is often so off kilter, that the first few times I almost felt the orchestra was running away with it somewhat, but after closer attention feel that perhaps North intended it that way. Of the early space bound settings, perhaps the most notable is the more lengthy Moon Rocket Bus which uses a mezzo soprano for the greatest effect I've heard outside of something by Ennio Morricone.

The album is rounded out at the halfway point with the Main Theme, which was written as an Entr'Acte and was as far as North was allowed to proceed in his writing. The Main Theme is a bit of a misnomer as it doesn't really match the style of the earlier music at all. In fact the middle section of this cue turns into a modernistic piece of jazz for orchestra that is as entertaining as it is unexpected. Jerry Goldsmith does a sterling job leading The Royal Philharmonic Orchestra in an impassioned and dynamic performance which is given a superb recording by Mike Sheedy. It avoids some of the muddiness that is associated with Varese's re-recordings and when reading the vast tome that are the liner notes, one realises that this was truly a labour of love for all concerned. The album is of course recommended in the highest terms, although the complexity of some of the material might be hard to take for those used to a more traditional way of scoring, it is worth persevering.
ALEX NORTH´S 2001
THE LEGENDARY ORIGINAL SCORE
Conducted by JERRY GOLDSMITH and the THE NATIONAL PHILHARMONIC ORCHESTRA

Not just a new release, this recording is an event of unparalleled importance in contemporary music. Film and camera crews from around the world, including NBC News, filled London´s famed Abbey Road Studios to capture and report on this very special occasion.

What is all the fuss about?

After 25 years, composer Alex North´s lost score for Stanley Kubrick´s legendary film masterpiece 2001: A Space Odyssey was to receive its world premiere recording! Anyone familiar only with The Blue Danube and Also Sprach Zarathustra are in for the surprise of their life when they hear for the first time this groundbreaking apocalyptic symphonic score composed by film music´s greatest master: Alex North.

JOHN WILLIAMS says...
'It has always been very well known in the musical community that Alex North was one of the most exceptionally gifted composers of his generation.
All of his fans around the world will be thrilled to receive the news that Alex´s score for 2001: A Space Odysses is finally going to be released to the public. I personally am enormously grateful to Varese Sarabande Records and to Jerry Goldsmith for bringing Alex´s great music to the world.'

Soundtracks from the collection: Kubrick Films