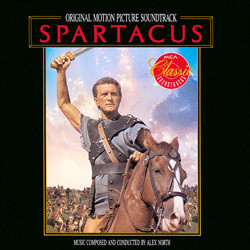 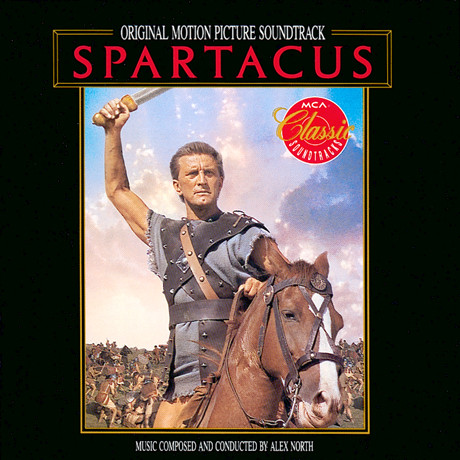 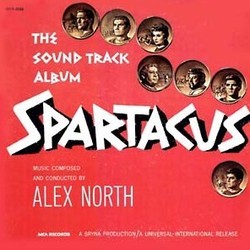 Show reviews in other languages
Spartacus - 10/10 - Review of Tom Daish, submitted at 2010-10-02 11:47:10
Strictly speaking, this is Alex North's only proper collaboration with Stanley Kubrick since 2001 didn't feature in the film, but by all accounts this was a reasonably happy collaboration. Alex North really deserved to work with high calibre directors and while there were some good directors with whom he worked, only Kubrick is really note worthy today and that was only one successful joint venture. I've always maintained that Alex North's orchestral scores are actually a lot more accesible than many of his contemporaries, they seem to have a more timeless quality that say Miklos Rozsa or Alfred Newman, but without the claustrophobic intensity of someone like Bernard Herrmann. This is not to say that North's music is simplistic at all, merely that North takes a slightly more pragmatic approach than the glorious excess of someone like Rozsa.

Spartacus is an historical epic in every sense and even though I've never actually seen it, I can imagine that being from Kubrick it was possibly made in a somewhat different way to films such as Ben-Hur, Ivanhoe, or even something like Cleopatra, also scored by North. This album is only a fairly brief sample of what was originally written for the film and is slightly weighted toward the popular love theme (which was turned into a song of some description), but despite that, it is still a remarkably exciting and surprising experience. Rather than the pomposity of the typical Overture, the Main Title is still percussive and brassy, but in a far more terse and uncompromising way. It is not full of glory, but is more of a tense and militaristic call to arms, muted trumpets play off against one another backed by snare drum. The romantic music is perhaps where North veers more toward a traditional Hollywood feel to writing; the theme is string laden and somewhat syrupy, but just about avoids being grating, given enough alternate variations and orchestrations to prevent it becoming too wearing.

The few more exciting moments, like the Main Title, tend to refrain from excess, but use effective deployment of brass and percussion, with off-kilter rhythms and surprising harmonies to give the whole thing a more intimately intense feel. One thing that many historical epic scores lack is any light heartedness, but North actually effectively weaves in a few lighter moments, most notably the Hopeful Preparations which even incorporates some nice acoustic guitar writing. To complement Kubrick's apparently unintentionally sappy finale, North's music is perhaps at its most cathartic, but a short reprise of some of the material from the Main Title provides for just the right way to cap the score.

This MCA release is a straight re-issue of the original LP and has often been criticised for having poor sound and a poor selection of cues. In respect to the former, I would say that it sounds badly mixed rather than having poor sound due to degredation of the tapes. I happened to review Ben-Hur on the same day as Spartacus and while I felt that Ben-Hur had particularly note-worthy sound given its age (1959), Spartacus sounded like it had been recorded yesterday. Apart from some minor hiss, there is nothing that gives away this recording as from 1960. The complaints mainly stem from the harshness and brightness of the recording rather than the age of the tapes. The selection is deemed poor because, apart from the short running time, there is a tendancy toward the romantic material, whereas it is North's demanding action music that is perhaps where the writing is at its most impressive. However, for now this is the only available version, although Jerry Goldsmith has expressed great interest in re-recording around 70 minutes of the score, which were chosen by North before his death. Let us hope that this comes to fruition as I for one cannot wait to hear more of this superb effort.

Soundtracks from the collection: Kubrick Films