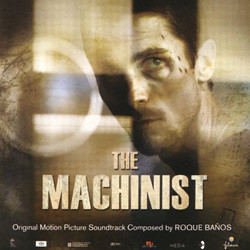 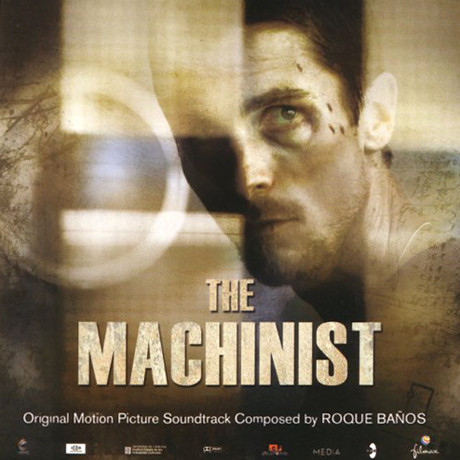 Show reviews in other languages
The Machinist - 07/10 - Review of Tom Daish, submitted at 2010-09-07 22:17:12
Along the lines of Memento and the theme of memories real or imagined, The Machinist stars Christian Bale as the titular character whose sleepless life apparently unravels around him. Unsurprisingly, it never made it to Guernsey, but Bale is one of my favourite actors and he generally picks fine films in which to star. Although the lead character is played by a British actor and many of the other characters have apparently Russian names, the film is a Spanish production and many of the cast and crew are Spanish. This extends to composer Roque Baños, about whom I know very little, only Sexy Beast sticks out in his filmography of otherwise Spanish productions (my knowledge of world cinema is shamefully poor). In any event, the film does seem the sort that might receive some kind of synth, indie score not worth hearing on disc, but Baños' score couldn't be more different from that preconception.
If Michael Giacchino was channelling the style of John Barry for The Incredibles then for The Machinist, Baños is summoning the spirit of Bernard Herrmann. From the queasy opening chord, the entire score almost plays as an homage to some of Herrmann's greatest works; the string based orchestration suggests Psycho although leaning more heavily on the mysterious elements of that score than the horror. That score's urgency is also effectively mined for Underground Escape, although the additional brass widens the orchestral timbre. The cue also uses a theremin (or entirely convincing synthetic imitation) which appears frequently, echoing The Day the Earth Stood Still while celesta passages recall the wonderfully haunting Fahrenheit 451 (one of my favourite Herrmann scores). As a largely talky drama, much of the music is low key, but just as Herrmann did, Baños maintains a nervous energy that never goes away. However, the pace picks up a little in the final third; the aforementioned Underground Escape, but also You Are a Liar and the especially nerve racking Ivan Kills Nikkolash? which plays like an action version of Vertigo, while incorporating many of the other aforementioned elements.

The Machinist is an undeniably effective score which is genuinely haunting, unnerving and occasionally quite thrilling. It's yet another reminder that effective writing is far more important than layers of drum loops when attempting to generate energy and momentum. In that regard, it's a very classy piece of work, but the spectre of Bernard Herrmann does loom very large and I'd be hard pressed to find anything in the score which isn't somehow inspired by the work of the master. However, to his considerable credit, Baños does not dumb down Herrmann's style and impressively avoids turning in the kind of cheap parody it could so easily could have become. While the precedents are fairly clear to the Herrmann connoisseur, they are combined imaginatively and if the rating must, to some extent, reflect that this is not an especially original work, it doesn't diminish the considerable pleasure to be derived from a fine homage.
The Machinist - 08/10 - Review of John Mansell, submitted at 2012-03-25 00:53:25
Composer Roque Banos has been writing music for films in his native Spain for a good few years now, but it is only recently that the composer has come to the attention of collectors out side of that countries borders, it was probably his score for SEXY BEAST that got the composer noticed at first, but I am sure that after his driving and somewhat complicated music for THE MACHINIST we will be hearing a lot more of him. THE MACHINIST contains a soundtrack that is for the most part downbeat and at times quite depressing, but given the subject matter of the movie this is the type of music that the images and story required. The composer has utilised the vintage electronic instrument the Theremin on many of the cues, it conjures up a sound and atmosphere that is uneasy and yet almost serene. I always remember the instrument being used liberally on the scores for all those Hollywood B sci-fi movies when an alien or monster appeared. It was effective then and still remains so within Banos's score. The work is a sparse one, being scored for a small string section, piano and also a few brass and woods, sometimes I prefer works such as this, they are a rewarding listen, there are no big expansive themes here, but intricate and harrowing cues that create an atmosphere of dread and also terror, but saying this the score also has a few more lighter interludes, which are beautifully compelling in a nervous way. As in the cue I KNOW WHO YOU ARE, which contains a sorrowful violin solo. One can, I think compare this music to some of the late Bernard Herrmann's work, in particular VERTIGO and in certain sections PSYCHO, which is highly noticeable in the cue IVAN KILLS NIKKOLASH, this is an interesting, complex, dark, disturbing and attractive score that I think will be returned to many times, it is also a score that once listened to will inspire the listener to seek out more of the composers works on CD.
Trailer: