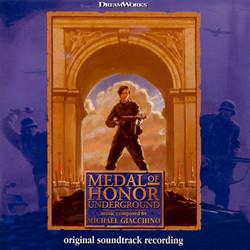 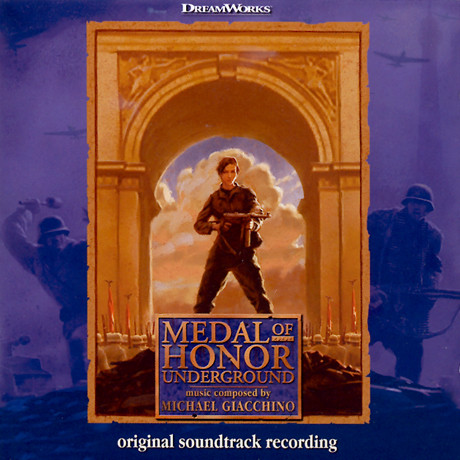 Medal of Honor: Underground - 08/10 - Review of Tom Daish, submitted at 2010-09-11 09:32:21
Michael Giacchino's original Medal of Honor garnered quite considerable acclaim, especially since it was music for a computer game and yet featured music that wouldn't disgrace a big budget film. In fact, it was a whole lot better than many film scores of recent times. Fortunately, when a sequel to the game was commissioned, so was a new score and so we join La Resistance and go underground. While the approach is along similar lines, there is a greater diversity in thematic and emotional content. The opening Main Theme sets this new tone by introducing a fetching accordion motif, along with a Glory (and Prokofiev) style choral theme, which is most effective, despite its obvious antecedents.
As with the original, the first few tracks are more suspenseful - I think it's the nature of computer games to have music for the opening levels which isn't as engaging as that written for those later on. Amongst the Dead is a particularly effective suspense cue, with a mournful chorus suggesting the horror of the occasion. Panzar Blockade moves the score into more exciting territory with plenty of percussion and brass as a superb musical depiction of the Nazi war machine. As with the original, there is a definite 1980's John Williams lilt to the music and specifically the Indiana Jones scores. The brass punctuation of Escape from Casablanca are unmistakable, but what is pleasing is that while paying obvious homage, Giacchino is able to inject a considerable amount of wit into his writing, something that most Williams imitators are invariably incapable of doing. The album ends in a similar manner to the original, this time with a faux period song which is pleasant and quite idiomatic, but the orchestral backing seems surprisingly undernourished. There is also an alternate to the opening title, which isn't ever so different, but makes a good bookend for the album.

The liner notes contain general notes by the producer of the game and composer, together with a useful track by track analysis, in a fit of high production values that shames most soundtrack albums. Although the music does obviously allude to Williams at times, there seems a much stronger stamp from Giacchino and for that reason, Underground is perhaps more successful than its predecessor. By its very nature, there aren't many of the dramatic personal cues of a regular film score - this is music for either suspense or action - but Giacchino overcomes the limitation to provide music that really is toward the top of the quality ladder. Even John Williams doesn't often write such beautifully self contained action cues any more, although I suppose Giacchino doesn't have quite the same precise timing issues of a film. It seems incredible that Giacchino hasn't landed a major film score assignment yet, but it can't be far off.
Medal of Honor: Underground - 10/10 - Review of Andreas Lindahl, submitted at 2008-01-20 21:25:40
Michael Giacchino returns with an entertaining score for the video game Medal of Honor: Underground, the sequel to the successful Medal of Honor, both first person point of view action games taking place during the second World War. The score for the first game was also composed by the then quite unknown Giacchino, whos name, thanks to the popularity and success of that very score, soon was to be found in the subject lines in many film music forums, newsgroups and mailing lists. His music for Medal of Honor was praised by both critics and fans, and people just couldn't believe that a composer that talented "only" wrote music for video games. Big budget games, sure... but there had to be a large film for him to score, waiting around the corner!?

Unfortunatly, this has yet to happen, but in the meantime, the composer scored Medal of Honor: Underground, and once again, thanks to DreamWorks, a soundtrack has been released, with a playing time of over 65 minutes. Yummy.

Before I continue, I just have to say this: I love scores that entertain me. As long as it's playful, lively, melodic and lyrical, you can be sure that I'm enjoying it. And you know what? Medal of Honor: Underground is playful, lively, melodic and lyrical and I just love it! And track nine, "Labyrinth of the Minotaur", might just be one of the best action cues I have heard in a very long time. The secret? Low, bouncy strings, strong brass, lively woodwinds and percussion. Ethnic influences. And a great theme, or motif, repeated througout the entire cue.

While the first score was heavily influenced by John Williams' adventure and action music of the 80's, such as the composers' scores for the Indiana Jones films, the sequel score seems to rely more on Giacchino's own style.

The orchestra - once again The Northwest Sinfonia - seems to be of normal size, so there's nothing special about that, really. But the addition of a small boys choir - about 25 kids, according to the liner notes - gives this score that special epic, adventurous and grand sound. Add to this some French influences, such as the use of an accordian in a couple of cues, and you've got a score that is at least as good as its predecessor. If not better.