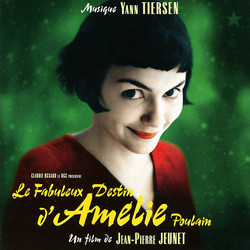 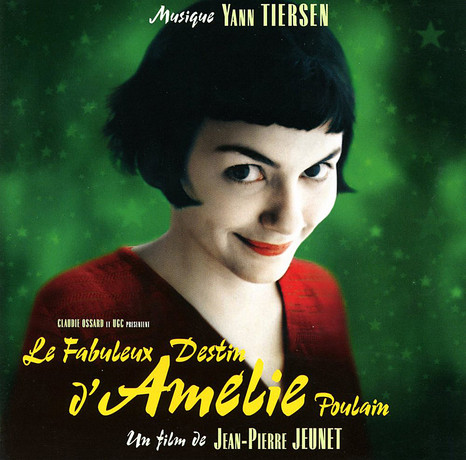 Show reviews in other languages
Le Fabuleux Destin d'Amélie Poulain - 07/10 - Review of Tom Daish, submitted at 2010-10-09 20:45:57
It seems somehow inappropriate to start a review of a charming score to a lovely film with a rant, but I feel I must. In the UK, the film was rated 15, but anyone who's seen Amélie will know that no child would find anything offensive or corrupting about this movie. It all hinges on one, extremely brief montage of orgasms and a glimpse of a woman giving birth. The result is that the film gets a higher rating than the extremely violent Terminator 3 (which was a 12A over here - shocking given the level and quantity of violence) and in the US, both films received an R. It seems insane that such violence is considered so unexceptional and acceptable for kids to see, yet natural events such as sex and birth are seen as something we should shield from children. Were it not for those scenes, the film would be a PG at most, but I'm sure many younger viewers missed out on a wonderful fairytale as a result. Anyway, enough ranting. The film is, as you might have gathered, marvellous and coming from the director of Alien: Resurrection, a surprising change of pace.

Yann Tierson has contributed to several French films, but it was one of Tierson's other albums that convinced Jeunet to ask him to score the film. In the tradition of Georges Delerue, Tierson contributes what sounds like an amalgam of every score ever written for a film set in Paris. The most important melody is, of course, La Valse D'Amélie which is presented in several versions from the accordion led first incarnation through to a full orchestral, but towards the end appears on piano alone. Many of the other cues are in a similar style, accordion led waltzes, often with witty orchestration that includes a toy piano, carillon, mandolins and other unexpected instruments, often performed by Tierson himself. The orchestra makes a few appearances, but by and large the scale is small. There is a surprising hint of Michael Nyman on a couple of occasions, notably La Noyée and Pas si Simple, where his earlier Greenaway scores are suggested, but all with Tierson's Gallic charm added as standard.

There are a couple of old French songs, complete with crackly gramophone sound which work well alongside the underscore. An honorable mention must go to Les Jours Tristes as it's co-composed with Neil Hannon, from the UK group, The Divine Comedy that Hannon fronts and writes all the songs (or he did until their split, but Hannon is still writing under the band's name and at time of this review, a new album is expected in early 2004). The Nyman influence here is unsurprising as Hannon has often mentioned his love of Nyman's music and many of the band's earlier songs have a strong Nyman sound in their accompaniment. It could be argued that Amélie is a little too similar in tone throughout so if you like one of the waltzes, you'll probably like them all, but if that kind of Parisian style doesn't appeal then Tierson's music will likely fail to generate a positive response. However, as an antidote to Hollywood scoring and a European change of pace, Amélie the score is as lovely as Amélie the film and both are easily recommendable.
Le Fabuleux Destin d'Amélie Poulain - 08/10 - Review of Andreas Lindahl, submitted at 2008-01-20 21:25:40
Amélie. Or Le Fabuleux destin d'Amélie Poulain as the original French title reads. Both the film, directed by Jean-Pierre Jeunet (Delicatessen, City of Lost Children and Alien Resurrection), and its score are some of the best hidden gems of 2001. I wouldn't be too surprised if the film actually wins an Academy Award for best foreign film. And don't be surprised if the music, by Yann Tiersen, gets a nomination for best score, as well. Who knows, it might even win. The Academy seems to like melodic and lyrical scores for European films (Il Postino and Life is Beautiful both come to mind). And you know what, although the Academy mostly works in mysterious ways, them giving an Oscar to Tiersen is something I could live with.

With a wonderful Audrey Tautou (is it legal to be that cute?) in the leading role, Amélie revolves around the life of a shy and innocent young girl named Amélie Poulain, who lives alone in a small apartment in Montmartre, Paris and spends her days working as a waitress in a café. One day, just having heard the terrible news about the death of Princess Diana, she finds an old, dusty box filled with photos and toys, behind a wall in her bathroom. She decides that if she can find the owner (now an adult man), return the box to him and make him happy, she will dedicate her life to helping people. If the film sounds charming, warm and colorful to you, the reason probably is that it actually is charming, warm and colorful.

The same goes for Yann Tiersen's score. Charming, melodic and innocent, it reflects the nature of the naive Amélie really well. There are no "Mickey Mousing" in this score. Tiersen seems to pay attention to and underscore the mood of the scene, rather than following the action on screen in every detail. Thankfully. Because this makes it incredibly easy to enjoy this score on CD, as a standalone listen.

Heavily influenced by traditional French music, the music is performed by strings, accordion, piano and a small number of other instruments. Tiersen performes the majority of the instruments himself, from the piano and vibraphone to the banjo and toy piano. Strings are used in a couple of cues, but the orchestral sound is mostly very small throughout the entire score. There are a lot of solo performances by the piano and the accordion, and with cues dominated by lively waltzes this is a score that without doubt makes the listener happy. After having seen the film, I left the cinema with a big smile and every listen to this score leaves me with an equally large smile and a warm heart. Something I always welcome here in the cold and dark winters of Scandinavia.

Two source cues, not composed by Tiersen, are included as well. Although they are quite decent, they're somewhat distracting since they interrupt the flow of Tiersen's score. Amélie is not for everyone, though. If you don't enjoy cheery, happy music with a French twist, performed by accordion and piano stay as far away from this score as you possibly can.
World Soundtrack Awards: Best Original Soundtrack of the Year (Winner)
World Soundtrack Awards: Soundtrack Composer of the Year (Nominee)