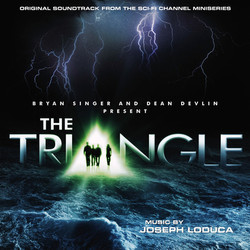 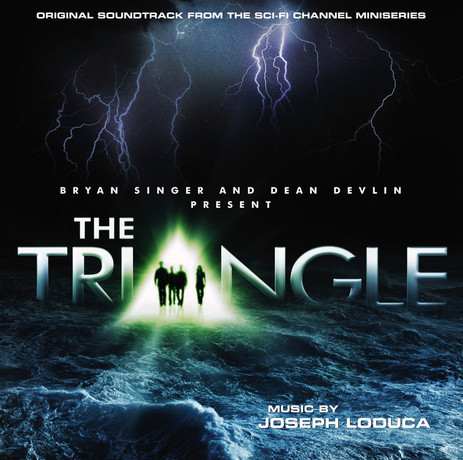 The Triangle - 03/10 - Review of Tom Daish, submitted at 2010-09-28 22:32:20
Much to my disappointment, The Triangle is not a big budget version of the 80's, British drama series Triangle, set on a north sea ferry, but a big budget sci-fi about the Bermuda Triangle. Judging by some of the talent - Sam Neill, Bruce Davison, Eric Stoltz on screen, with Dean Devlin and Bryan Singer as producers - one would hope that it's a half decent miniseries but I can't say that the premise inspires me in any way. Joseph LoDuca has never quite broken out of television scoring to big budget features, but recollections of his Hercules and Xena music are that the best bits took more than a little inspiration from better known fantasy film scores and the rest was variable, but generally fun.

As often seems to be the case, the opening is reasonably promising and the first few tracks mildly engaging. The Main Title theme isn't especially memorable, but sets the tone, while Cigar Boat is a fairly effective piece of low key action. Some have commented that LoDuca's music owes some debt to John Powell's Bourne scores in its use of repeating phrases and percussion, but where Powell does something with his riffs, LoDuca's are set on repeat. String ostinatos chug away accompanied by low key synthetic percussion, but never really develop into anything. There is a real orchestra in there, but it hardly feels an essential component outside of the very occasional big moment (a short passage in The Whalers, for example). The lengthy Reality seems entirely synthetic, save for an apparently acoustic guitar, and is a slightly trippy mix of synth pads, but outstays its welcome after a couple of minutes.

Listening through for the first time, I kept hoping that maybe LoDuca was building towards a more spectacular finale, but if anything, the second half seems fizzle out. The only lengthy track, Taking a Dive, trots out more of the same vaguely ominous ostinatos but the ensuing tracks are brief, noodling along and ending rather unceremoniously without any feeling of resolution or payoff. One would expect that a miniseries composer has a little more time to write than those composing for weekly drama, yet the scores for Lost, Stargate or, to pick a home grown example, the newly invigorated Dr Who, contain far more variety, imagination and drama than LoDuca's effort. If this were for a weekly show I'd perhaps be more forgiving, but for something with a budget and scale more akin to a movie, The Triangle is largely dull, repetitive and unmemorable.
The Triangle - 04/10 - Review of Andreas Lindahl, submitted at 2008-01-20 21:25:40
The Triangle is a Sci-Fi Channel mini series about a group of specialists, trying to figure out the truth about the Bermuda Triangle. Sounds familiar? That's because it's been done to death about a million times - a diverse group of people trying to work together to solve some kind of mystery. How original. Actually, it's only redeeming factor is that it stars Sam Neill and Eric Stoltz.

Joseph Loduca's score for the series isn't that inventive and fresh, either. Although a real orchestra apparently was used to record the score, the music has a tendency to sound totally artificial at times. Especially the brass, which sounds flat and totally void of any vibrato or life whatsoever.

A rythmic three note figure permeates large portions of the score, acting, according to Loduca, as a reminder and representation of the ever present military. It's also a subtle, or perhaps not so subtle, reference to the Bermuda Triangle itself, of course. Although the "Main Title" cue is somewhat memorable, the problem with The Triangle is that it never gets going. And it never stops. Impossible, you say, but this is what I mean: The Triangle is 50 minutes of rather uninteresting underscore, dominated by electronics and ostinatos that pretty much all sound the same. Loduca doesn't seem to be interested in really developing his musical ideas. Flat and uninspired.
Presenting the original soundtrack to the smash hit Sci Fi Channel Mini-Series THE TRIANGLE, produced by Bryan Singer (X-MEN, THE USUAL SUSPECTS, SUPERMAN) and Dean Devlin (STARGATE, INDEPENDENCE DAY) and starring Sam Neill (JURASSIC PARK, MERLIN), Eric Stoltz (THE BUTTERFLY EFFECT, ANACONDA) and Lou Diamond Phillips (24, YOUNG GUNS). Acclaimed composer Joseph LoDuca (XENA, HERCULES, EVIL DEAD I & II, ARMY OF DARKNESS) fashions a powerful orchestral score, harnessing all the excitement and intrigue of this amazing television event. CD booklet includes exclusive liner notes. THE TRIANGLE is the highest-rated Sci Fi Channel Mini-Series since 2002. It makes its North American DVD debut in stores everywhere on March 28, 2006 from Lionsgate Home Entertainment.