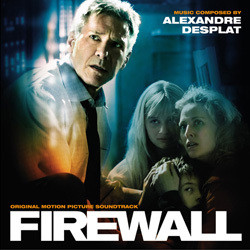 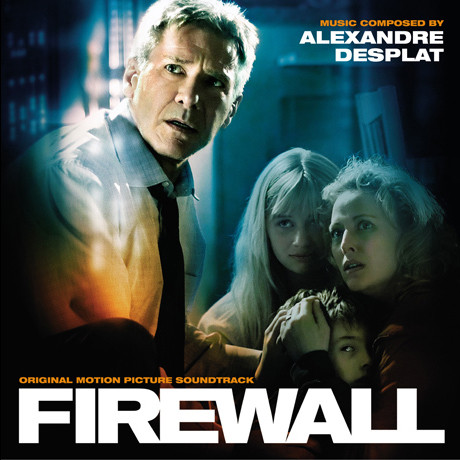 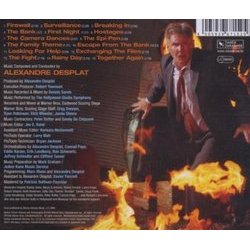 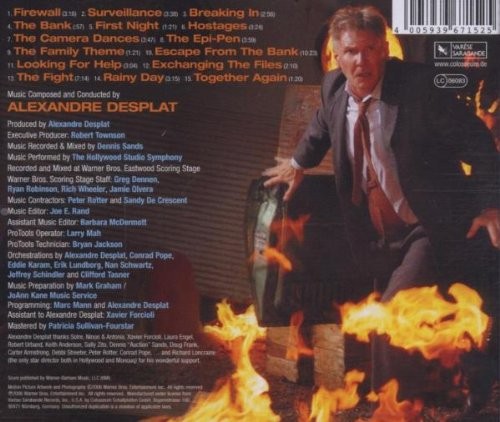 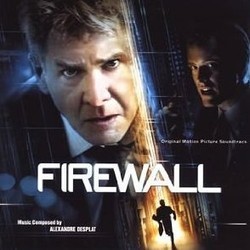 Show reviews in other languages
Firewall - 08/10 - Review of Tom Daish, submitted at 2010-09-08 22:36:23
Firewall is yet another action thriller in which Harrison Ford continues to grow old disgracefully. I only hope that the oft promised Indiana Jones 4 takes a slightly more realistic view of Ford's age - nobody is going to accept him being dragged behind a truck before overpowering half a dozen Nazis with his bare hands these days. Still, Firewall has received fair reviews even if its post Christmas release date is hardly an endorsement of its quality. Ten years ago, Firewall would seem obvious Jerry Goldsmith territory, but these days Brian Tyler would seem a good bet. However, his fine work on the similar Hostage evidently led the producers to Alexandre Desplat, who is building up a nice repertoire of generally good, high profile assignments and furnishing them with consistently fine scores. Firewall is no exception.
The nominal opening cue might lead one to wonder whether the wrong disc is in the player (or iTunes has mislabelled the filename, if you're a child of the 21st century) starting, as it does, with a barrage of breathless action; swirling strings, percussion hits, horn trills and other brass bursts. Not subtle by any means and certainly not the kind of refinement one expects from Desplat, but the level of detail in the writing is still considerably above average. Desplat does not pad things out, nor does he simply bang away without direction. If it doesn't necessarily recall Goldsmith specifically, then the level of craft here is almost comparable. Significantly less accomplished music could easily have been penned for a throwaway thriller, but Desplat rarely seems content to write down to the material, applying the same quality to all his assignments. A commendable trait.

After the excitement of the opening, the album moves more towards suspense, but as demonstrated with Hostage, his talent in this area is equally abundant and he never lets the material lag. After a series of shorter tracks, the ten minutes of Escape from the Bank are as fine a suspense cue as one could hope to find. Desplat's writing has a sense of purpose that so many composers are unable to achieve. The repeated elements are laid down, but either evolve or other ideas are added in coherent and entirely musical ways. More action orientated is The Fight, but again the excitement is sustained admirably over the seven minutes running time, keeping going when other composers might have let the material fizzle out or just thrash along mindlessly.

Memorable melodic material is perhaps in somewhat shorter supply than one expects from the composer, but The Family Theme is a lovely melody and its brief presentation midway does make one wish for a longer concert arrangement. Then again, a four minute stand alone version would probably sound like it belonged in another film entirely. The melody is subtly referenced in a number of other cues, but only fully asserts itself again for the finale, Together Again, forming the obligatory happy ending. Unsurprisingly, the refinement of his quieter scores is largely absent and there are some stronger allusions to other composers (a paraphrase of a descending James Horner's four note suspense motif - not, I hasten to add, his much overused danger motif - in Escape from the Bank, plus other hints of Goldsmith and Williams) but nothing startling or enough to take away from another fine achievement.
Computer security specialist Jack Stanfield (Harrison Ford) works for the Seattle-based Landrock Pacific Bank. A trusted top-ranking executive, he has built his career and reputation on designing the most effective anti-theft computer systems in the industry, protecting the bank's financial holdings from the constant threat of increasingly sophisticated internet hackers with his complex network of tracers, access codes and firewalls.

Jack's position affords a comfortable life for him, his architect wife Beth (Virginia Madsen) and their two young children - a standard of living that includes a beautiful home in a residential community just outside the city.

Bill Cox (Paul Bettany) has been studying Jack and his family for many months; monitoring their online activity, listening to their calls and learning their daily routines with an arsenal of digital and video recorders and parabolic microphones that tap into the most personal of information. Having spent the better part of a year methodically infiltrating every aspect of Jack's identity, Cox is now ready to make good on his investment.

Leading a tight team of mercenary accomplices, he seizes control of the Stanfield house, making Beth and the kids terrified hostages in their own home and Jack his unwilling pawn in a scheme to steal $100 million from the Landrock Pacific Bank.

With every possible escape route shrewdly anticipated and blocked by Cox, every potential ally out of reach and the lives of his wife and children at stake, Jack is forced

to find a breach in his own formidable security system to siphon funds into his captor's offshore account - incriminating himself in the process and eradicating any electronic evidence that Cox ever existed.

Under constant surveillance, he has only hours to accomplish the risky transactions while desperately hunting for a loophole in the thief's own impenetrable wall of subterfuge and false identities to save his family and beat Cox at his own game.