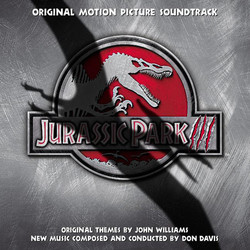 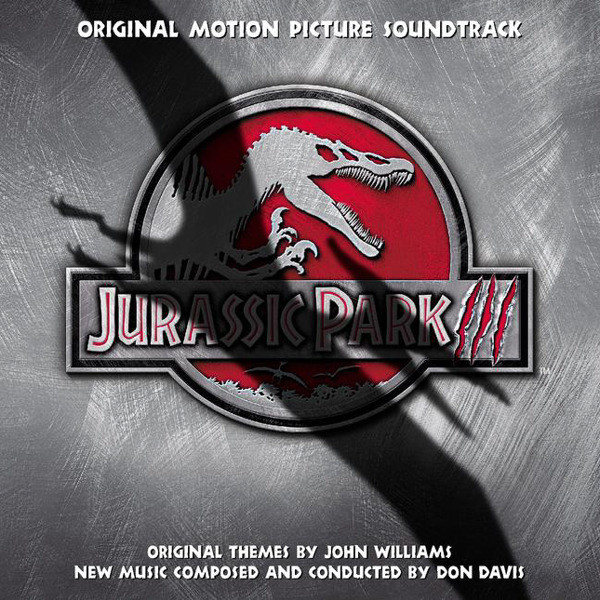 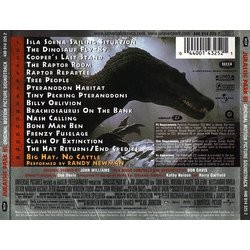 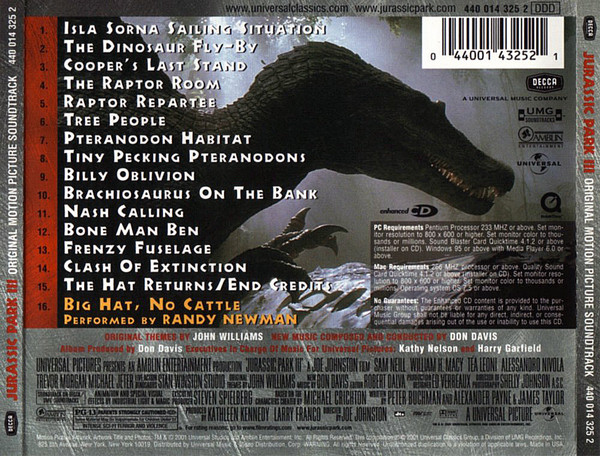 Show reviews in other languages
Jurassic Park III - 06/10 - Review of Tom Daish, submitted at 2010-09-11 08:37:36
In a summer of turkeys, I had hoped that Jurassic Park III would be something less of a prehistoric turkey (yes, that really bad pun was just waiting to escape), but unfortunately for my money, was yet another disappointment. Actually, that's not quite true. The middle of the film has plenty of exciting sequences, but the film is just one long middle with only a cursory few minutes to open and close, the ending being particularly weak and contrived. The whole T-Rex in San Diego would have been a more convincing way to end. Having said that, Sam Neill makes a welcome return as Alan Grant and William H Macy does the best with a none too challenging role.
Don Davis has the dubious task of picking up where John Williams left off. Having said that, the considerable number of mediocre reviews that the score to The Lost World garnered, does at least leave Davis with room to write something more akin to the original and please those individuals. Unfortunately, the spectacle of the original is largely gone and into a more streamlined action flick. Davis gets a couple of chances to air the original themes in full, the island fanfare during The Dinosaur Fly-By and the main theme during Brachiosaurus on the Bank. Hints of the original themes crop up elsewhere and some of Williams' other themes, notably his four note raptor motif. That motif in particular I think could have been used to more interesting effect here, given the important role that species plays in a larger part of the film.

Davis' own theme is something of a family drama melody given its best treatment during the end credits. It's pleasant enough, but just a touch too sweeping, yet homely to be truly convincing. The action sequences are variable; the Pteranodon cues are truly thrilling as is the pounding Clash of Extinction, but even these are somewhat on the directionless side. That kind of musical narrative flow would admittedly have been difficult to achieve with the film such as it is, but a little more story telling in the music wouldn't have gone amiss. Many of the favourite Davis ideas, the overlapping low brass of The Matrix in particular, get plenty of air time in and around the Williams styled music. I don't think anyone would mistake this for a John Williams score, all the Williams flourishes are directly from his original themes, but outside of those, the flourishes are by and large distinctive as Don Davis' own work.

It seems that I have to hold the fort when it comes to defending Randy Newman and I still find it shocking how few people appreciate the amusing irony of his songs. Admittedly, Big Hat, No Cattle isn't one of his best songs and doesn't fit stylistically with the rest of the score, but it was at least used in the film (to quite ironic effect) and could hardly be accused of being a cheap marketing ploy. Newman not exactly selling many records himself, much to my continuing disappointment. Like the film, there is a great score waiting to escape somewhere, but unfortunately Davis had to keep up with Joe Johnston's more frenetic directing and above the screams and roars in the film, the score was often drowned out completely. Probably a more creative score than would have been managed by a lesser composer, but like the film itself, not entirely memorable.

Soundtracks from the collection: Jurassic Park