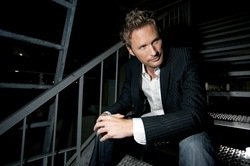 Born in Los Angeles, California, film composer, multi-instrumentalist, and conductor Brian Tyler began writing music at a very early age. Tyler completed his Bachelor’s degree at UCLA and his Master’s at Harvard University. In 2002, Tyler’s score for the film Fitzgerald received an Emmy nomination. Additionally, Tyler has also been awarded multiple ASCAP awards. He has written music for films such as Eagle Eye, Bangkok Dangerous, Fast and The Furious 3 and 4, Dragonball Evolution, The Killing Room, and Rambo 4. Brian Tyler recently completed the score for the new Sylvester Stallone film, The Expendables, and he is assigned to write the score for Battle: Los Angeles and for three videogames, Lego Universe, Far Cry and True Crime.

In this new Composer Talk Brian talks about working again with Sylvester Stallone on the Expendables, the recording of the Hawai 5.0 theme, his score to Middle Men and the music that he wrote for three videogames. We also got some information about Battle: Los Angeles and Fast Five!

So check it out!