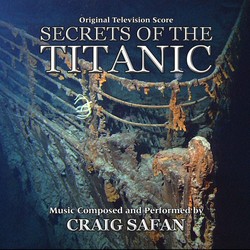 Dragon’s Domain Records, to be distributed through buysoundtrax.com, will be releasing SECRETS OF THE TITANIC, featuring music composed by Craig Safan (THE LAST STARFIGHTER, SON OF THE MORNING STAR) for the 1986 documentary produced by Dennis B. Kane, Nicholas Noxon and Teresa Koenig spotlighting the efforts of Dr. Robert D. Ballard and his team to explore the recently discovered remains of the Titanic in 1985, featuring narration by Martin Sheen.

Dragon’s Domain Records, to be distributed through buysoundtrax.com, will be releasing SECRETS OF THE TITANIC, featuring music composed by Craig Safan (THE LAST STARFIGHTER, SON OF THE MORNING STAR) for the 1986 documentary produced by Dennis B. Kane, Nicholas Noxon and Teresa Koenig spotlighting the efforts of Dr. Robert D. Ballard and his team to explore the recently discovered remains of the Titanic in 1985, featuring narration by Martin Sheen.

On September 1, 1985, deep-sea explorer Dr. Robert Ballard and his team found the RMS Titanic, broken in two on the seabed some 12,500 feet below the ocean’s surface. Ballard and his team were aboard the Research Vessel Knorr on a trip financed by the U.S. Navy to secretly locate the wreckage of two of the Navy’s nuclear powered submarines, which had sunk in the area in the 1960s.
After having located the remains of both subs, Ballard was permitted to use the Knorr’s resources to hunt for Titanic. On the 56th day of that search, a trail of debris led Ballard and his team to the Titanic’s final resting place. It was the first time in 73 years that human eyes had observed the once-mighty, and daringly designated “unsinkable,” ocean liner.

A year later, on July 13, 1986, Ballard and his team returned to Titanic on the Navy’s Research Vessel Atlantis II, bringing along the 3-person deep-ocean research submersible Alvin and a suitcase-sized remotely-operated submersible named Jason Jr. These resources enabled Ballard to travel down to the wreck site in Alvin, and deploy Jason and its video cameras into the wreck, capturing the first close-up images from inside the sunken Titanic.

In 1986, CBS TV broadcast the special SECRETS OF THE TITANIC, a documentary film that traced the journey of the Titanic from its launch to its sinking, and its discovery by Dr. Ballard. Narrated by Martin Sheen, the television special provided the first images the public had ever seen of the shipwreck.
Threaded throughout the exploration sequences is the heartbreaking story of Titanic, the tragedy of those who perished, and examinations of various sinking theories.
The broadcast ran about 41 minutes and was moderated by folk singer Tom Chapin and followed by an extended interview with Ballard.
As short time later, The special updated the SECRETS OF THE TITANIC television broadcast with additional footage from Ballard’s expeditions that replaced the Chapin segments and the standalone Ballard interview, and released it on VHS from Vestron Video.

SECRETS OF THE TITANIC featured a musical score by Craig Safan, who had scored REMO WILLIAMS: THE ADVENTURE BEGINS and WARNING SIGN the year before and was currently scoring some of the episodes of the revived TWILIGHT ZONE, Steven Spielberg’s AMAZING STORIES, and the pilot for the new ALFRED HITCHCOCK PRESENTS.
The TITANIC documentary film would be the first of many National Geographic specials that Safan would score over the years.
Safan composed his score in November, 1986, performing the music himself on the array of electronic instruments in his own studio.
At this time, many years before the launch of the National Geographic Channel, the National Geographic specials had limited budgets, which restricted Safan to an electronic score, mostly carried out by the Synclavier, a powerful digital synthesizer, sampler, and music workstation developed in the late 1960s.
This restriction prompted Safan’s creativity and gave him a sense of freedom in creating music for the show. While Safan’s main Titanic theme was written out and then orchestrated for his electronic array, other moments were improvised on the keyboard as he watched the scenes unfold.

Craig Safan has composed music for numerous feature films, television shows, theatrical musicals, and circuses. He is the winner of eight ASCAP Top Show Awards as well as an Emmy nominee.
Craig is also a recepient of a Watson Foundation Fellowship and is a member of the Executive Music Committee at the Academy of Motion Picture Arts and Sciences. Currently Craig divides his time between Los Angeles and New York City where he is developing several new musicals.

Dragon’s Domain Records presents the world premiere recording of the score to SECRETS OF THE TITANIC, featuring music composed by Craig Safan, and mastered by James Nelson of Digital Outland. The booklet contains liner notes written by noted author Randall D. Larson and includes comments from the composer.

SECRETS OF THE TITANIC is a limited edition release of 500 units.


Secrets Of The Titanics soundtrack page