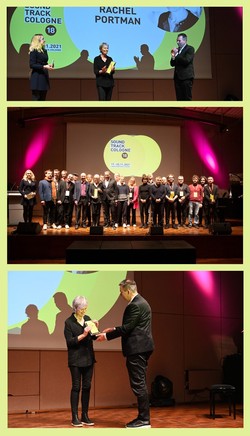 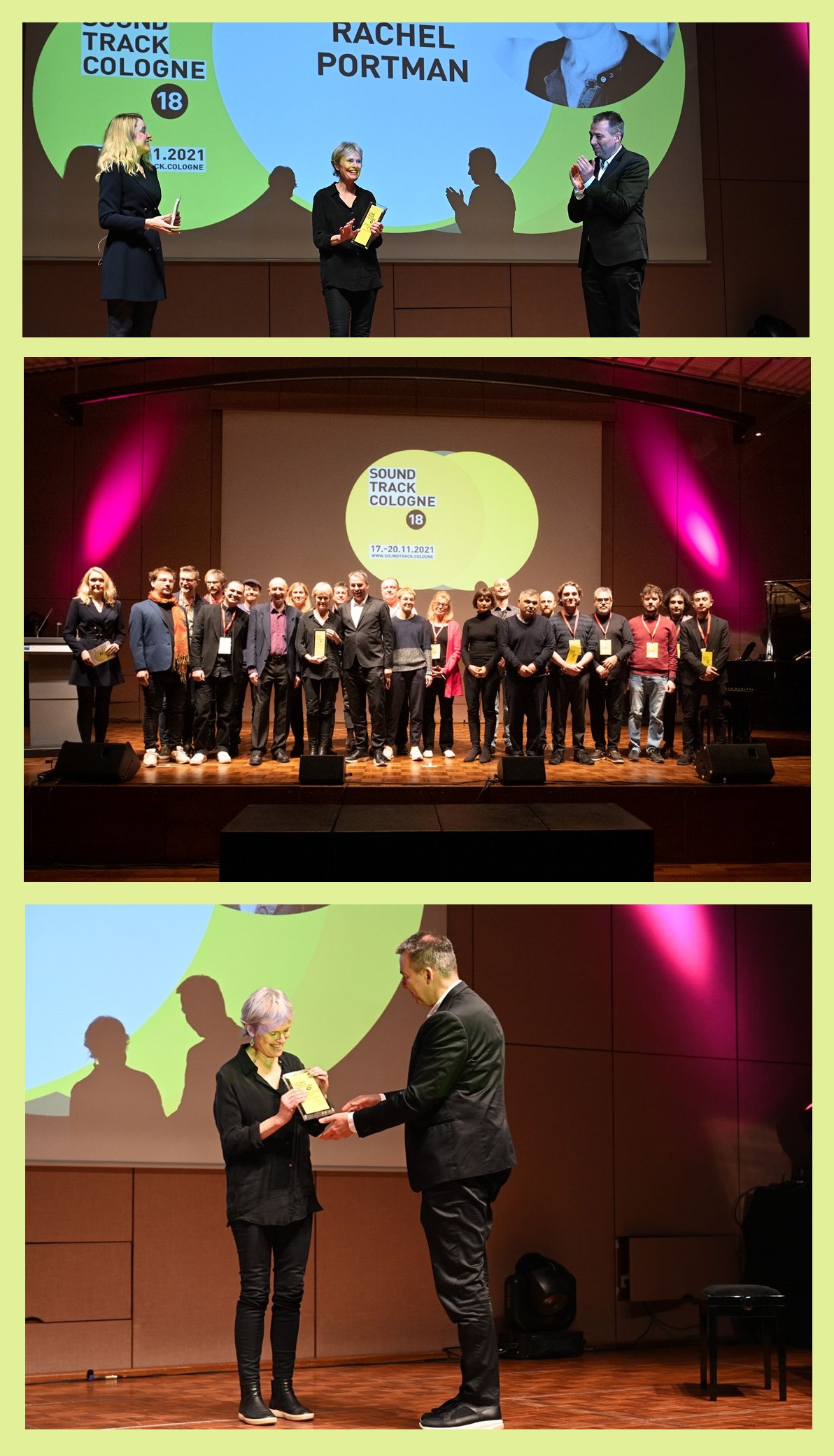 Rachels career demonstrates considerable breadth and depth, as well as longevity. We greet her as a familiar friend, yes, but a friend who is perfectly capable of surprising us. praised Academy Award-nominated composer Gary Yershon about Oscar winner Rachel Portman, who received this year's SoundTrack_Cologne Lifetime Achievement Award.
Portman was visibly touched: 'I would like to thank Michael Aust and the SoundTrack_Cologne team. It's a really unique and very important festival.' Jean-Michel Bernard also played a medley of her film scores in Portman's honour.
Rachel Portman, who was the first woman to win the Academy Award for film music, was also the first female composer to be honoured with SoundTrack_Cologne's Lifetime Achievement Award.

15 team and individual entries from a total of 24 composers and sound designers were nominated for the EUROPEAN TALENT AWARD this year. The winner of the WDR Filmscore Award is Ludwig Peter Müller, the prize for Best Sound Design went to Maximilian Sattler and an honourable mention from the jury went to the Italian Delta Sound Composers team: Lorenzo Gioelli, Francesco Giubasso, Andrea Guzzoletti, Stefano Patrizio, Riccardo Pettinà, Alessandro Stocco
The European Talent Award has been one of the central events of SoundTrack_Cologne since its beginnings. The works of the competition participants, who enliven a short film with a new world of music and sound, show how differently the soundtrack can narrate one and the same film. This year's competition film was called 'Mall' by Jerry Hoffmann.
The jury consisted of Jef van Even (Chaussee SoundVision), Barbara Krämer (Bavaria Sonor music publisher), composer, producer and songwriter Alex Komlew, composer Flemming Nordkrog (HARPA Award 2021) and, Michael Seal, conductor (Associate Conductor of the City of Birmingham Symphony Orchestra (CBSO), guest conductor WDR Funkhausorchester)
The winner wins a one-day recording session of his or her own composition with the WDR Funkhausorchester. The prize for Best Sound Design is a 5.1 surround short film mix in the renowned sound studio Chaussee SoundVision in Cologne, which donates this prize.
Statement of the jury:

Ludwig Peter Müller:
This work left us with the feeling that something special was happening while we watched it. Its journey from humour to pathos was special in that it was created from minimal instrumental means.
Additionally, by just changing the tempo of the drumset, effective and unexpected emotional narrative impact was provided, and it was the film we all wanted to see again and again.

Maximillian Sattler:
The sound design gave us unexpected moments that made us laugh out loud. The excellent integration with the high-quality, accomplished score showed also how effective the sound design was. It grounded us clearly in the storys reality and transitioned effectively into the inner-world of the characters.

Delta Sound Composers:
Collaboration is an integral part of film music and sound design process. Our Lobende Anerkennung/Honourable Mention showed us that with the right communication you can build great things even within a large team. By introducing a new piece of music in the credits they let the story evolve further and in a captivating way.

The statement of the jury:
The winning score convinced the jury with its strong, powerful and creative musical language for a strong and focussed portrait of a skilled and fascinating character.
The innovative sound characteristics of the live recorded strings show a tonality of deep artistic understanding of art itself and takes us on a journey.
Although the score was added afterwards to the movements of the dancer, both elements become a stunning unity.

The Peer Raben Music Award honours the best music in a short film and is endowed with 1,500 euros. It commemorates the composer Peer Raben (1949-2007), who became known for his work for Rainer Werner Fassbinder, among others.

Thomas Höhl received an honourable mention for the music to 'Jeijay' by Maren Wiese and Petra Stipetić.

The statement of the jury:
The jury would like to mention a tasteful and clever composition.
Its unconventional combination of somehow cheesy elements with a memorable motive provides a major contribution to the film it accompanies.
An honorable mention of the Peer Raben Music Award 2021 goes to Thomas Höhl for his music to Jeijay.

To quote the jury:
For three years, director Deepti Gupta accompanied the Indian singer and activist Sona Mohapatra for her impressive portrait 'Shut Up Sona'. The feature-length documentary brings us closer to a woman who, with her music, her lyrics, her whole attitude, vehemently and courageously  and despite constant threats - stands up for the rights of women in India. While fighting tirelessly for equal rights and freedom to live, to perform and to participate in India's political discourse, 'Shut Up Sona' also reveals insights into India's religious mythology by taking us on Sona's artistic research journey, where she takes a new, unique look at traditions and deities. It is a pleasure and a privilege for us to award 'Shut Up Sona' the prize for Best Music Documentary at SoundTrack_Cologne.

 Forbidden Strings' by Hassan Noori received a special mention. The jury: We would like to give an honourable mention to the courageous documentary 'Forbidden Strings' by Hassan Noori, which shows in a remarkable way what it means when the universal human right 'to participate freely in cultural life and to enjoy the arts' is not given. How can you live if your country does not allow you to live your dream? 'Forbidden Strings' shows the very personal struggle of four young musicians in Iran who put their lives on the line for a music performance in Afghanistan. A film that is deeply thought-provoking.