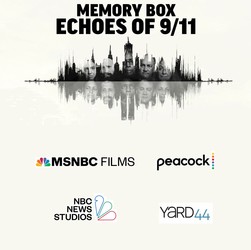 This album is available on Amazon and other music.

Memory Box: Echoes of 9/11 is directed by David Belton and Bjørn Johnson.

In the wake of 9/11, artist Ruth Sergel set up a plywood video booth in New York City, Washington, D.C. and Shanksville, Pa. Hundreds of eyewitnesses shared their intimate recollections in the aftermath of the attacks. Now, twenty years later, they return to reflect upon the past two decades and how theyve moved forward. Meet some of the voices of Memory Box: Echoes of 9/11. .


Paul Saunderson is a vastly experienced British composer with over 50 credits in Film & TV, including RAWs BAFTA nominated and ACADEMY AWARD shortlisted feature Three Identical Strangers and Sister Pictures hit ITV series Cleaning Up.
The unique tone to Pauls scores is underpinned by his innovative approach to musical sound design, complementing his skills as a multi-instrumentalist, performing and recording on the majority of his scores from his South London studio. This was highlighted in 2019 with Paul releasing his debut album Passage on Decca imprint 1631 Recordings.
Paul has also written arrangements for a variety of recording artists including Coldplay, Kasabian, The Cinematic Orchestra, and Guy Garvey of ELBOW. The collaboration with Guy has led to a fruitful partnership resulting in the recent scoring of Apple TVs Trying and Mike Bartletts acclaimed 2020 BBC series Life.
Paul has recently completed work on YARD 44's feature documentary for MSNBC 'Memory Box: Echoes of 9/11' soon to play at Toronto International Film Festival.
Coming soon : The Obscure Life Of The Grand Duke Of Corsica, starring Timothy Spall and Peter Stomare.