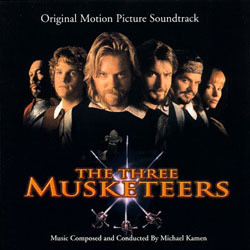 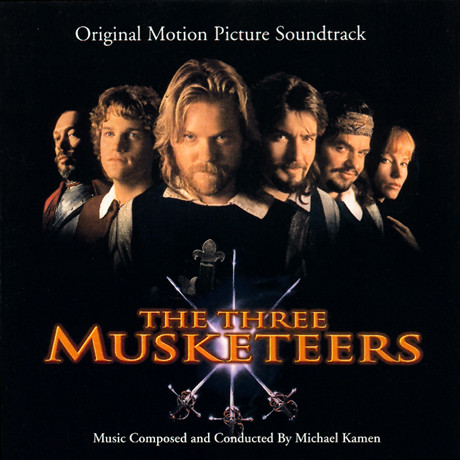 The overall style of The Three Musketeers is very French baroque, but with modern orchestrations. Classic baroque instruments, like the harpsichord and the oboe damore, are used to great effects. This fits perfect with the film, as usual with Kamen. And not only does this score fit with the film, it is also a very enjoyable listen on CD. The score is both rousing and very beautiful, and does not contain any unlistenable action music. This is adventurous music at its absolute best. On the soundtrack album the score has been arranged into a sort of baroque suite, with titles referring to the type of music, like Passacaille or Concert Royaux. The pieces has been arranged so these titles fit with the piece as well, even when taking their musical meaning into consideration. In other words, featured on the CD is a kind of concert suite, and therefore the music is not always as we heard it in the movie. The order is a little different, but it does not matter in this case since the CD is such a complete listening experience.

Kamen is good at using all parts of the orchestra, but it is not often that he also utilises a choir in his scores. But in this he does and he does it really well. The first track The Cavern of Cardinal Richelieu, is a great choral display, with a lot of power. It actually has some similarities with Howard Shores The Fellowship of the Ring (well, really its the other way around). Slow and powerful it is, anyway. The best track on the entire CD is in my opinion DArtagnan  a very rousing piece of work, excellently orchestrated. Kamen likes to use the percussion a lot, and that is very evident in this piece, and in the score at large. For the action music, Sword Fight and The Cardinals Coach are great pieces, the latter with some great rhythmical work. The last piece, The Fourth Musketeer, rounds up the score perfectly and ends the CD like a grand finale.

The CD is opened by the pop song with Bryan Adams, Sting and Rod Stewart, All For Love. This is actually a great song, co-written by Kamen. And parts of the thematic base of the score come from this song. Furthermore, Kamen has created a lot of memorable themes here. The CD is rather short, just above 40 minutes, but still it covers most of the music in the movie  the parts not included are mostly the same themes in the same arrangements in just another order, or something similar. Nothing to miss really, in other words.

What dominates this score is joy. In its spirit this is a very uplifting score, even if some parts are more dramatic. But in the core it is adventure, and it is joy. Kamen has created a modern baroque music, and has above all created wonderful themes to use in this baroque setting. On CD, the score stand very well on its own, almost like a concert work, with complete arrangements and in the end it adds up to a more or less perfect listening experience.
The Three Musketeers - 07/10 - Überprüfung der Tom Daish, eingereicht am 2010-09-28 22:13:44 (Englisch)
After the runaway success of Robin Hood: Prince of Thieves, the historical swashbuckler was back in fashion, although few were nearly so successful. Many were updated for the TV generation - more recent films now including seemingly obligatory martial arts in the fight scenes, what would Errol Flynn have thought?! Where Korngold accompanied Flynn on his adventures, so Kamen's music accompanies Charlie Sheen, Kiefer Sutherland and, er Chris O'Donnell on theirs and while it doesn't quite have the Korngoldian pizzazz, the results are still satisfying. The album opens with the rough voices of Rod Stewart and Bryan Adams, with the somewhat more silky tones of Sting, in the Anything I Do shameless cash in song, All for Love. It's not a bad effort, but never quite reached the popularity of the earlier Adams song (which to many is probably a blessed relief) and the sound of the two crooners trying to out-rasp each other, and Sting, is plenty enjoyable.

One thing that Korngold never really bothered with was period feeling, he stuck firmly to his late romantic style, but Kamen goes for a more quasi-authentic approach. Well, there are harpsichords in it anyway. The opening choral cue is surprisingly liturgical and it's something of a disappointment that this material doesn't recur. It has moments that sound like every passionate, but religious, choral cue you've ever heard, although I'd be hard pressed to cite a specific precedent. This being a period adventure, there are some more modern sounding action cues, although Kamen includes a few Purcell style trumpet trills and fortunately does nothing so offensive as to include any synths. It is perhaps a surprise that much of it is string led, especially the energetic The Cardinal's Coach which instantly conjures images of horse drawn carriages racing through misty forests.

The score goes faux (pre-)baroque in the quieter passages, but the song melody isn't really suitable for the style of the underscore and so doesn't really feature. There are enough fine moments to make The Three Musketeers worth hearing, but it just lacks that indefinable something to make it a great score. Overall, it's a better and more consistently entertaining listen than Robin Hood: Prince of Thieves; the basic thematic material is perhaps less striking, but the action doesn't give the feeling of a composer marking time, even if there are fewer obvious highlights. The track listing is notable for the authentic sounding subtitles - Lament, Rigadoon, Gavotte etc. - and if it were anyone but Kamen, I'd say it was the composer being pretentious, but I'm inclined to think the music was written to be authentic to the descriptions. Not perhaps Kamen at his finest, but as a composer disinclined to do anything but a professional job, still worth checking out.