And Do They Do - Michael Nyman 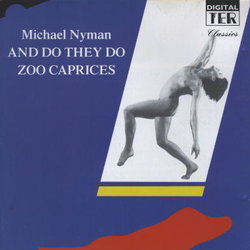 Michael Nyman is one the foremost British contemporary composers for his work in the minimalist classical field. Best known for his Oscar winning score for THE PIANO, Nyman encompasses a whole spectrum of music from JAZZ to full symphonic works but always with his own personal style and it is for this style that he is now one of the top selling classical composer. Michael Nyman conducts his own Michael Nyman Band for this recording. AND DO THEY DO was commissioned for the London Contemporary Dance Theatre and consists of four linked 'songs' of which the third is based on Schumann's NACHTLIED Opus 19 Number 1 and is a spin-off of Nyman's opera THE MAN WHO MISTOOK HIS WIFE FOR A HAT. ZOO CAPRICES is a transcription of a work for small orchestra (for a solo violin, performed by Alexander Balanescu), originally composed for the score of the film A ZED AND TWO NOUGHTS. Recorded in digital sound at Abbey Road Studios.