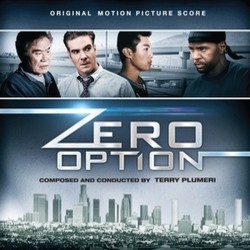 Even though he has been proven to be prolific in the fields of jazz and classical music as well, Terry Plumeri may be better known to film scoring fans as the composer of passionate crime and war stories, where he gets to focus on the characterÆs emotional journey rather than the action on screen. This approach can be heard in titles like TerryÆs debut score for Black Eagle (1988) or Charles BronsonÆs franchise-closing opus Death Wish V: The Face of Death (1994). TerryÆs works in the field have been acknowledged with a number of awards: his music for the 1994 One False Move (a member of The New York Times List of the 1000 Best Films Ever Made) was nominated in the Best Score category at the IFP Spirit Awards. In addition to orchestrating his own music, Terry also likes to revisit his roots as a musician by playing bass on several of his scores.

Following our release of Night Eyes 3, KeepMoving Records offers a double-header CD featuring two of the composer's lesser-known works. Directed by David Batts, Zero Option can be best compared to Paul Haggis' Crash as it also tells the story of three unrelated individuals whose lives will collide in a most unusual manner. These are a Japanese family where the lack of cultural traditions lead to generational differences, a typical businessman whose faith in capitalism is about to be shattered and a criminal whose third strike may get him to jail sooner than he wanted. Plumeri treats each storyline with its own distinct musical ideas, ranging from Japanese influences to dissonance and a hit of Americana with solo guitar.

The second film is called The Sleepless, which was directed by Domonic Paris who is now known for his animated features like Fly Me to the Moon and the Sammy movies. The Sleepless tells the tale of Uncle Mike, a high ranking gangster whose nephew is also in for a bright, crime-filled future, but the disharmony in the family structure leads to inevitable tragedy. Plumeri's music for The Sleepless has an edgy neo-noir feel where the obligatory genre template (the muted trumpet solo familiar from Nino RotaÆs The Godfather scores) is placed into an orchestral context with a few electronic additions.

Featuring two excellent scores for the price of one, the CD also comes with an 8-page booklet with commentary by Gergely Hubai and personal impressions by Terry Plumeri describing how his music fits these lesser seen gems.