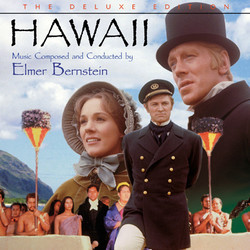 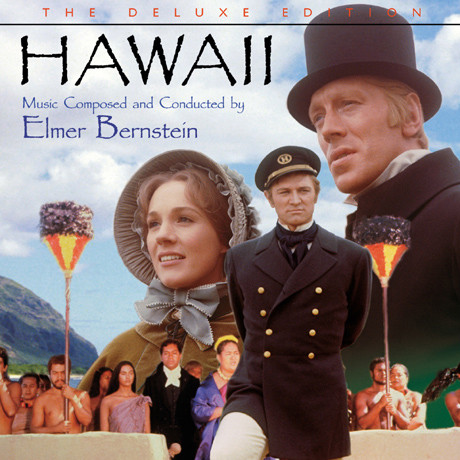 Hawaii (1966) is an epic saga based on James A. Michener's (1907-1997) over 1,000-page novel of the same name. George Roy Hill's lavish 189-minute production starred Julie Andrews, Max Von Sydow, Richard Harris and Gene Hackman in the cinematic telling of Michener's sprawling, multi-generational adventure. Von Sydow played Abner Hale, a Yale student who, on the day after receiving his diploma (in 1819), hears Hawaiian Keoki Kanakoa (Manu Tupau) speak to a group of fellow brothers who have been studying for their ministries at the University. Kanakoa makes a plea for the group to supply missionaries to bring Christianity to the islands and save the souls of his people. When Abner and his friend John Whipple (Hackman) later volunteer themselves for such service, Hale learns that he must first find a wife before he can be accepted into the program. The University's Reverend Thorn (Torin Thatcher) (The 7th Voyage of Sinbad) arranges for Abner to meet his sister's daughter. The 22-year-old girl, Jerusha Bromley (Andrews), is thusly courted and married in short order and Abner Hale, now accompanied by his new, young wife soon leaves Boston for the remote, mystical, almost mythical, land of Hawaii.

To score his immense new production, Hill reteamed with Elmer Bernstein, who had scored the director's film immediately prior to Hawaii (The World of Henry Orient, 1964) and would go on to score the director's following picture (Thoroughly Modern Millie, 1967), which would earn the composer an Academy Award. Bernstein's vast musical panorama for Hawaii, displays a near ecstatic degree of energy and enthusiasm. It's a jubilant and rapturous work which makes frequent visits to Bernstein's well of melodic invention. The score is, without question, one of the composer's most, magnificent opuses.

Presented here as a 2 CD Deluxe Edition, the release of Hawaii represents a triumphant film music event. Disc one features almost the entire score, over 75:00 of music, in mono. Disc two features the contents of the original soundtrack album release, in stereo.

Why is this latest batch of Varese Sarabande CD Club releases later than planned? This is why:

The CD premiere of Elmer Bernstein's Hawaii represents a journey as perilous as the one which transported Abner and Jerusha Hale to the exotic islands. Production began based on the knowledge that multiple reels of session masters, in stereo, and allegedly containing the entire score, had survived all these years among the MGM/UA archives. With a stereo LP master also having survived, I had visions of a most elaborate and extraordinarily exciting 'Deluxe Edition' of one on the composer's finest scores. Such hopes were immediately undermined when, after being retrieved from the studio's storage vaults, all of the Hawaii reels were seen to be labeled with the troubling alert - right channel - water damage. I received delivery of the tapes from MGM and, maintaining hope amidst much reason for concern, sent them to my mastering engineer for transfer. Fear gave way to relief, albeit briefly, when Universal Mastering engineer Erick Labson put up the first tape and heard the room fill with a glorious stereo sound - for all of two minutes - before being overtaken by such serious damage as to render the right channel virtually non-existent and the tapes utterly useless. Erick phoned me with the terrible news and I was heartbroken. I placed a despondent call to Chris Neel at MGM to apprise him of the situation and inquire about whether the studio had any other music elements for the film. In the meantime, at a slightly later date, I was at Universal Mastering for another project and asked Erick to put up the first tape, wondering if the two minutes which he said had been miraculously spared, presented even one cue in its entirety. I was now prepared for the worst and held out little hope that MGM would locate any alternate source. My one hope, however, was that we might be able to add a single bonus cue to the LP master. Talk about dashed expectations! Erick played the tape. Beautiful sound to be sure - that warm, enveloping and uniquely Bernstein orchestration - a love theme no one else could have written - and it all sounded like it could have been recorded yesterday. It also sounded a whole lot like The Hallelujah Trail. In fact, it was The Hallelujah Trail. Every reel, clearly marked 'Hawaii' on paperwork, the tapes themselves and the boxes in which they were stored, contained not Elmer's 1966 score for Hawaii, but his 1965 score for The Hallelujah Trail. Initially I was in shock, but this quickly gave way to the realization that, not only did we still not have any usable stereo tracks from Hawaii, I had just inadvertently discovered that session masters for The Hallelujah Trail had, unbeknownst to anyone, survived all these years but that it is they that now lay damaged beyond any hope. Our bad luck and its ramifications were compounding. In an attempt to leave no stone unturned, Chris Neel retrieved a set of mono Hawaii tapes which, in the archive's files, were labeled as 'music and effects' tracks (Not something usable for CD purposes for much beyond, perhaps, main or end titles, devoid of extraneous film sound effects), while I checked in with Elmer himself to see if he, by chance, possessed anything that might help us. He didn't. But our first bit of good news finally came when Chris discovered that these 'music and effects' tracks had also been mislabeled and were, in fact, music only. Apparently, many years ago, a copy of the score had been made for Elmer onto 7-1/2 ips tape, but that these reels were somehow never delivered to him. Once I received those I found that we had a lot of music and that this actually was Hawaii. How complete it was going to take a lot of work to determine though. The tapes contained no titles, no cue numbers and offered no way to identify anything other than by just going though the entire film and, by ear, matching up film cues with the cues that appeared on these tapes. It was a long haul. The good news, the great news really, was that almost the entire score existed here. There were a few things missing, mostly very short cues, but, all in all, we had really discovered Hawaii this time, albeit in mono, and not exactly on master quality stock, but we had it. As I had all but resigned myself to the realization that Hawaii's CD premiere would be no longer that its 36:00 original soundtrack LP, the present double CD set represents a remarkable turn of events. Much work went into finding how the technologies of today could best enhance the sound of the tapes we had, and the results, I think, are truly astounding. It is frightening to think how close this music came to being lost completely. A story that looked set to become one of film music's greatest tragedies is now a remarkable story of rescue. - Robert Townson